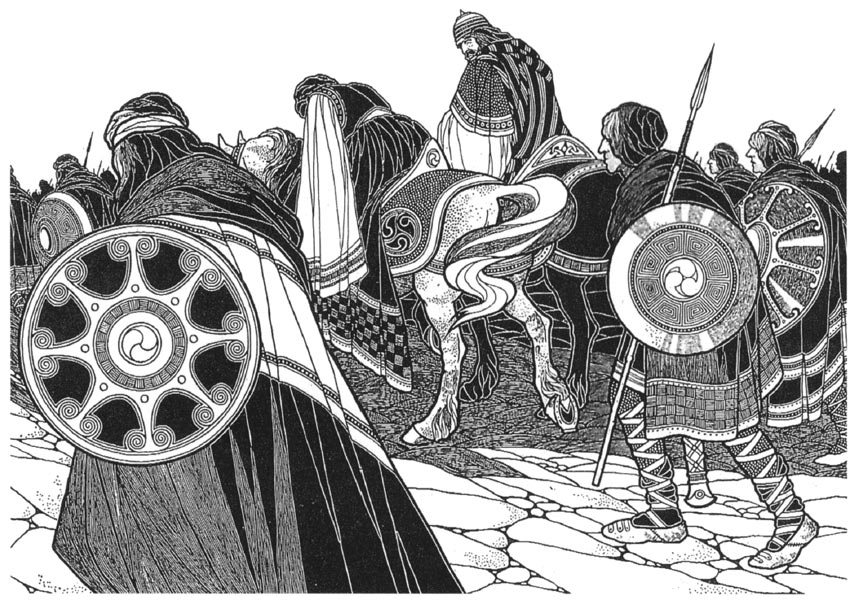 One of the commoner settlement types to be found in Irish archaeology are the ráthanna or so-called ring-forts 40,000 of which are known to have existed during the first millennium CE (and probably many more than that). These were a class of fortified homestead consisting of a circular earthen bank inside an exterior ditch which together enclosed a large and slightly elevated open space. Both bank and ditch could vary considerably in size and composition, some being faced with timber or stone to provide additional structural support, and most were topped with a fence, stone wall or thorn-hedge. A single entranceway, usually gated and paved, provided access to the interior of the ráth or ring-fort, the area inside being known as the lios or “enclosure, courtyard; farmyard”. Normally there was one central dwelling, a roundhouse or teach (frequently with a smaller semi-circular extension known as the cúlteach “back-house” or cuile “pantry; storeroom”), with some additional buildings for habitation or storage. Circular pens and stables for animals were also common though mainly for use at night or during inclement weather. Most livestock were kept in seasonal pastures or in the urlios “outer-enclosure, outer-courtyard”, a circular zone of gardens, orchards, fields, kilns and barns which radiated out from the ráth like the petals of a flower. Beyond this was the socially important faiche or “green, lawn; infield”, a large area of open grassland used for sports, ceremonies and other communal events.

While most ráthanna conformed to the above template there were variations, those associated with powerful lords or kings frequently consisting of multiple bank-and-ditch formations capped with palisades or walls, elaborate non-aligned entrances and huge central enclosures. These prominent settlements were usually known as dúnta “fortresses” or by similar prestige terms (cathair “fortress, stone-fort”, brú “residence, palace”, etc.). Ráthanna remained the standard type of home in Ireland for nearly a thousand years and reflected the relatively peaceful society they were constructed in. Their ability to withstand a military attack was minimal but that was not their purpose. The bank-and-ditch surround was in most cases simply the Medieval Irish equivalent of a modern garden fence or wall rather than a strictly defensive structure. It was as much about keeping out animal predators as human ones, about demarcating the property line as deterring belligerent trespassers.

That said there was one aspect of many ordinary ráthanna that did have a more ostensibly defensive role and that was the uaimh “cave” or uaimh thalún “earth cave”. Known to archaeologists by the modern French term souterrain the uaimheanna were underground passages and chambers whose entrances were situated in or near ráthanna, more often than not originally concealed from public view. Though most were relatively simple affairs others were extraordinarily elaborate with a maze of stone-lined tunnels and subterranean rooms, including obvious defensive architecture such as choke-points, hidden drops, blind turns and escape shafts. In times of peace the uaimheanna would have served as places for extra storage (to keep certain foods and liquids chilled). In times of war they would have been the ultimate refuge or route to escape, of which there is plentiful evidence, both archaeological and literary.

By the year 1300 the vast majority of uaimheanna, which had strong regional biases, had fallen out of use and very few new ones were being constructed. This reflected the disruption in Irish society and population distribution caused by the Norman-British and Anglo-British invasions of the 12th century spurring radical changes in settlement types. Ireland went from a nation that was largely peaceful (at least by the standards of post-Roman and Medieval Europe) to a nation that was largely at war, with the majority of its inhabitants – new and old – clustered in heavily fortified strategic positions along the coast or existing in isolated or transitory habitations. While many hundreds of ancient uaimheanna or souterrains are known to archaeology undiscovered ones are still turning up reflecting their widespread use.

Ironically during Ireland’s War of Independence the construction of underground refuges was given a limited revival in the form of hides, dumps and bunkers by the Irish Republican Army, who used them to conceal or house arms and equipment as well as volunteers on active service or in hiding (though this owed as much to the European battlefields of World War I as to any indigenous traditions). During the Long War, the conflict in the north-east of Ireland from 1966-2005, the (Provisional) Irish Republican Army also made use of subterranean bunkers, in some cases reusing those dating back to the revolutionary period decades earlier.

I was reminded of all this by the current crisis in the Gaza Strip and the use of underground networks by the Palestinian forces to combat their Israeli attackers. Though the Israeli Defence Forces (IDF) had prior knowledge of the existence of the tunnels they were clearly unprepared for the manner in which the Izz ad-Din al-Qassam Brigades (the military arm of the Hamas government in Gaza City) had integrated their use into their battlefield tactics and overall defensive strategy. Even the normally supportive US media has had to acknowledge that the Israelis find themselves very much on the back-foot (which in no small measure is reflected in Israel’s resorting to “collective-punishment” attacks on the civilian population every time a localised engagement goes wrong or they find themselves toe-to-toe with a determined and more agile opponent). From the New York Times:

“As frustration grows in Israel over the military’s limited success so far in trying to neutralize Hamas, the militant Islamic group that governs Gaza, some military experts say it is increasingly evident that the Israel Defense Forces have been operating from an old playbook and are not fully prepared for a more sophisticated, battle-ready adversary. The issue is not specifically the tunnels — which Israel knew about — but the way Hamas fighters trained to use them to create what experts in Israel are calling a “360-degree front.”

Of the 32 fortified tunnels that the Israeli military has exposed so far, at least 11 run deep beneath the border into Israeli territory. Others are part of an underground labyrinth inside Gaza connecting buildings, weapons stores and concealed rocket launchers.

Israeli troops in Gaza described Hamas gunmen who vanished from one house, like magicians, and suddenly popped up to fire at them from another. And while Hamas fighters are able to use the tunnels to surprise the forces from behind and to attack those in the rear, Israeli soldiers find themselves having to improvise.

In this latest asymmetrical war with Hamas, the third in five years, Israel thought it was prepared. It had built up an integrated communications systems able to transfer intelligence in real time to air and ground forces, an advancement that military officials called a “force multiplier.

What Israel was apparently less ready for was Hamas fighters who are willing to engage and are trained to use tunnels, a tool of war whose roots go back to antiquity. During Israel’s last ground incursion in the winter of 2008-9, Hamas fighters largely avoided clashes, melting into the crowded urban landscape. This time, they were prepared for combat.”

This is examined in more detail by the CS Monitor which highlights the influence of the militia forces under the control of the Jihad Council, the military wing of  the Lebanese movement Hezbollah, and their 2006 clashes with an Israeli invasion force in southern Lebanon. During that brief conflict the IDF’s expeditionary forces faltered when confronted by an entrenched, well-prepared enemy making use of defensive networks of tunnels and bunkers. While Hamas learned the lesson from Israel’s de facto defeat at the hands of Hezbollah it seems that the Israelis chose once again to believe in their 1973 Yom Kippur-born myth of military prowess as the Middle East’s “only superpower”. The failure to anticipate their enemy’s real assets and potential can be seen in the subsequent ramping up of military resources committed to the assaults against Gaza. Israel now has some of its most high-profile units engaged in fighting the Al-Qassam Brigades and other Palestinian insurgents. The fact that even with its crème de la crème thrown into the conflict the IDF still finds itself unable to deal a death-blow to the resistance it is facing says much about the country’s military acumen and that of its Palestinian opponents.

As Israel’s struggle to impose its iron-fisted authority upon the Palestinian people becomes more desperate the levels of vitriol and hate within the Jewish State have stepped up a pace. While one can excuse the folly of youth for some of the extremist and racist views being promulgated others have clear seeds within the current mainstream ideology of the Israeli nation. Indeed one might well claim that the failures of the IDF in Gaza and Lebanon in recent years are in part based upon the racist and sectarian views of Arabs held by the average Israeli military recruit. Just as anti-Irish prejudice distorted and ultimately inhibited effective military operations by the British Occupation Forces in Ireland during both the 1919-21 War of Independence and the 1966-2005 Long War so underestimating their opponents because of deeply seated biases has led Israel to make numerous tactical and strategic miscalculations in Palestine and elsewhere. That seems likely to only worsen in the years ahead. Unable to hold absolute military suzerainty any more Israel has adopted a scorched earth policy in relation to Gaza and its people, combatant and civilian alike. Something that is considerably easier to do when one regards one’s opponents as barely human.