Most observers agree that the applicability of the term “Celtic architecture” is largely a matter of perception since no such tradition of building design has survived into the modern or pre-modern eras, or at least none that can be labelled as authentically Celtic in origin. Indeed what defines a particular construction and artistic style as “Celtic” is itself debatable in light of the widely variant types of architecture popular at one time or another in the Celtic-speaking nations of Ireland, Scotland, Wales, Cornwall, Mann and Brittany. Only a handful of these types some could be regarded as stemming from indigenous thought or innovation. Unsurprisingly one has to go back quite a distance into history to find a design form explicitly associated with the Goidelic, Brythonic and Gaulish peoples of north-western Europe, the popularly labelled “Celtic roundhouse”. For centuries this particular type of free-standing structure dominated the landscapes of the Insular and Continental territories, with examples in Ireland ranging from the Bronze Age to the Middle Ages, a span of some 3000 years. Given such an extended history the “Celtic” designation may have some validity, especially when one considers that circular residences effectively replaced the oblong dwellings common to the proceeding Neolithic. Were roundhouses one of the cultural signafiers of the emergence of the proto-Celtic peoples along the Atlantic seaboard?

Early Irish law tracts, as well as various secular texts, give surprisingly detailed descriptions of these buildings, usually referred to as a teach, most of which tally with recent archaeological studies. The expected dimensions of the homes of the middle- and upper-classes are spelled out in these manuscripts, along with such factors as the placement of entranceways, hearths, sleeping-platforms, paved-flooring, rain-gutters and so on. What is most apparent with Irish roundhouses and their equivalents elsewhere in the Celtic world is the continuity of form and function. Having perfected the design at an early stage most later developments focused on size, ornamentation and material composition, the latter often dictated by local conditions: the use of dry-stone walls instead of organic ones in some regions, the development of the cúlteach or “backhouse” to create a double-roundhouse or figure of eight layout, the possible addition of an elevated platform or “balcony” under the roof in larger dwellings, the provision of subterranean cellars and passages (an uaimh or uaimh thalún) in less secure territories, the use of expensive shingles or wooden roof-tiles, the erection of internal, possibly movable, decorative screens or walls, and so on. However by the Middle Ages, under the corrosive impact of Scandinavian and Norman-British invasions, the Continental-style of relatively plain oblong and square buildings had once again became the norm in Ireland.

Leaving aside ecclesiastical innovations or adaptations such as the igloo-like clochán or “beehive hut”, the damhliag or dry-stone church and of course cloigthithe or round towers, further developments in Irish domestic dwellings soon included the architecturally more impressive “tower house”, almost certainly originating in the Medieval Irish-British “frontier” during the 1400s, and favoured by native Irish, Norman-Irish and Anglo-British aristocrats alike (the argument that it was the Irish who popularised its use as a more economical and viable equivalent of the large, exchequer-funded English garrison castles is a debatable one). Usually termed a caisléan “castle”, these were both domestic residences and fortresses, seats of local governance (Irish or otherwise) and market centres. However, despite their prevalence, some three thousand existing at one stage or another, by the 16th century they were an anachronism, rendered obsolete by developments in military technology and the advance of the Galltacht or the Anglo-British colony across the island.

Today the most distinctively recognisable type of vernacular architecture in Ireland, at least in tourist promotions, is the thatched cottage. In reality it is not too dissimilar to the “peasant” homes found across the Western European littoral from northern Spain to north-western Scotland since the 17th century, though the more “advanced” form probably didn’t reach Ireland until a relatively late date (in the early 1800s a sizeable portion of the island’s eight million people continued to live in the “cabins”, “huts” and “shanties” of wood, turf and dry-stone that would have been familiar to their colonially dislocated ancestors). However, despite their perceived Gaelic authenticity, there is relatively little that is uniquely Irish about such dwellings, though they have a certain, superficial element of pan-Celticness to them, whether Irish, Scottish or Breton.

When the Irish or Neo-Celtic renaissance took place in the late 19th and early 20th centuries it encompassed literature and poetry (in both native and foreign tongues), music and sports, art and design, but not, significantly, architecture. While many artists and intellectuals (temporarily) retreated to rural isolation, finding solace in the “simple homes of the peasantry”, there was no sudden surge in the construction of lime-washed cottages for the newly nationalist-minded bourgeoisie. The reasons for this are many, the most obvious being the challenge of funds, land values, modern amenities and popular taste, however even in the exercise of state-funded constructions following the revolutionary upheavals in Ireland there was no ambition to reimagine the past in a modern context. Beyond the odd commemorative “round tower” or “Celtic cross”, the inspirations for new architectural designs, private or public, remained firmly within the European and Western tradition, whether Neoclassical, Modernist, Art Deco, Constructivist or hybrids thereof. While Celtic influences were present, or at least were thought to be present in some decorative motifs, by and large most newly-founded buildings were identikit versions of Continental or American models. A “genuine” and natively Celtic style of architecture, however that would be defined or crafted, never emerged from the shadow of its colonial displacers or more mainstream design rivals. At least not in any of the recognised Celtic nations.

The arts’ magazine, Apollo, has an interesting appraisal of the Celtic architectural revival that never was, republished online from its January issue.

“…what about architecture? Was there no tectonic Celtic Revival to vie with the Gothic, the Byzantine, the Egyptian, the Tudor and so many other revivals?

…the peoples who felt they were Celtic looked to the early architecture of their once independent nations for inspiration. The Celtic Revival in architecture depended upon ancient shrines, castles, and vernacular buildings – folk art – for models and so can be regarded as a manifestation of the National Romanticism that inspired remarkable new styles in emerging nations all over Europe towards the end of the 19th century, whether in Finland, Hungary or Catalonia.

In Scotland, interest in what was termed the Scottish baronial went back to the time of Walter Scott and rumbustious reinterpretations of old Scots castles began to proliferate. By the end of the century such reinterpretations became more subtle in the hands of Robert Lorimer and Mackintosh. In 1891, the latter gave a lecture on ‘Scotch Baronial Architecture’, ‘a subject indeed dear to my heart and entwined among my innermost thoughts and affections’ and one which ‘is wholly or partially the architecture of this country alone, and is the only style which we can claim as being in whole or part our own’. The Hill House at Helensburgh, say, inspired as it was by the forms and treatment of old Scottish buildings, can therefore be regarded as a most sophisticated architectural manifestation of the Celtic Revival.

A Celtic Revival in architecture in Wales was problematic because of the relative lack of examples of a native architectural tradition, although the (English-born) Arts and Crafts architect, Herbert Luck North, was inspired by Welsh vernacular buildings. Ireland was more promising territory, both because of available architectural precedents and the impetus of a burgeoning nationalism. Irish patriots could point to the distinctive characteristics of native castles and early Christian churches – especially the round towers of the latter, a form which was revived for the tomb-monument of Daniel O’Connell, ‘The Liberator’, in Glasnevin Cemetery, Dublin.

In The Rediscovery of Ireland’s Past (1980), the late Jeanne Sheehy identified two waves in the revival of a ‘Hiberno-Romanesque’ style. The second, at the end of the 19th century, is the more rewarding. G.C. Ashlin, who had been the partner of E.W. Pugin in England, designed Romanesque buildings richly ornamented with elaborate Celtic patterns. In 1901 he gave a lecture on ‘The Possibility of the Revival of the Ancient Arts of Ireland and Their Adaptation to Modern Circumstances’. Above all there was W.A. Scott, the ‘drunken genius’ as one client, the poet W.B. Yeats, called him. Having worked for the progressive architects’ department of the London County Council, Scott returned to Dublin in 1902 and designed rugged stone churches in his ‘Irish-Romanesque’ style. He was also responsible for the O’Growney Memorial Tomb at St Patrick’s College, Maynooth, a masterpiece of sophisticated simplicity.

A Celtic Revival can even be traced in England. At Wreay in Cumbria that extraordinary amateur architect, Sara Losh, built a mortuary chapel based on the 1835 excavation of the early sanctuary of St Piran in the Sands in (Celtic) Cornwall; next to her amazing village church, St Mary’s, she built a mausoleum of cyclopean masonry which a family friend called ‘druidical’ and in front of which she raised a restored replica of the (Anglo-Saxon) Bewcastle Cross. And the most imaginative of all Celtic Revival buildings is to be found in rural Surrey, the work of another remarkable woman, Mary Seton Fraser Tytler, the second (Scottish) wife of the painter George Frederick Watts. An artist herself, she provided Celtic Revival textile designs to Liberty. In 1896 she started to build a mortuary chapel in the village cemetery at Compton near the Watts’ home, Limnerslease. Built of red brick with pantiled roofs and with round-arched openings, it is circular and yet cruciform in plan. External ornamental features were cast in terracotta by local people. Around the entrance is intricate Celtic decoration, while under the eaves are panels with stylised figures with mysterious faces similar to those drawn by ‘The Four’ and reminiscent of, say, those on the two-millennia old Gundestrup Cauldron. The dark chapel interior was completed in 1904 with paintings in thick gesso in a style which must be called symbolist.

The purpose of the elaborate iconography and symbolism which pervades the chapel was explained by Mary Watts in her book, The Word in the Pattern (1904): ‘In trying to revive in some degree that living quality which was in all decoration when patterns had meaning, the character of our own Celtic art – Ancient British, Irish, and Scotch as it is – has been followed, and many of the symbols are taken from carved stones and crosses, or from those rare and exquisite illuminations on vellum […] once the most sacred possessions of the Celts’. In the Watts Chapel, the Celtic Revival, art nouveau, the Arts and Crafts movement and fin de sièclesymbolism all come together to make an integrated, total work of art.”

One might argue that the most impressionistically Celtic architect of modern times was a non-Celt, the late Hungarian designer Imre Makovecz. Informed by influences as diverse as Rudolf Steiner and Frank Lloyd Wright, not to mention traditional Magyarian and Slavic folk-art, for fifty years he worked on a range of human-scale projects in his homeland, largely unknown to – or dismissed by – his outside contemporaries. It is only in recent years that his designs have gained a new audience and with it an appreciation of their oddly Celtic feel. 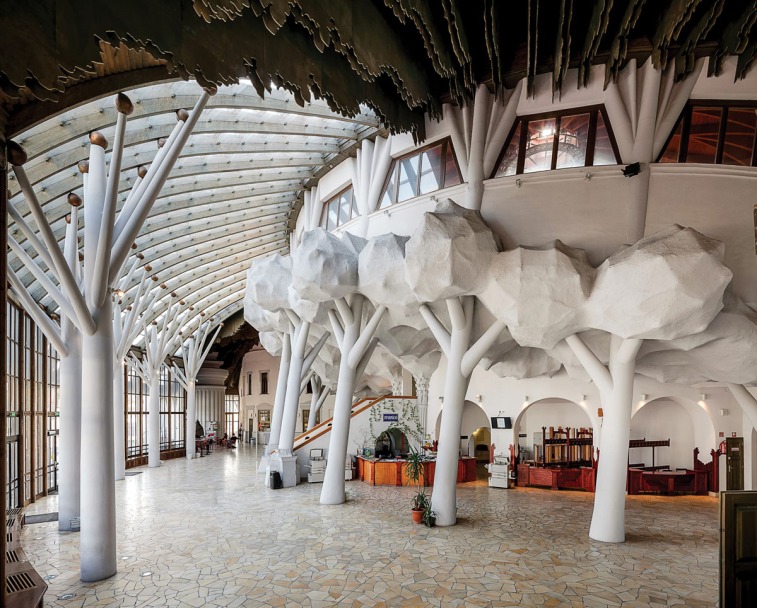 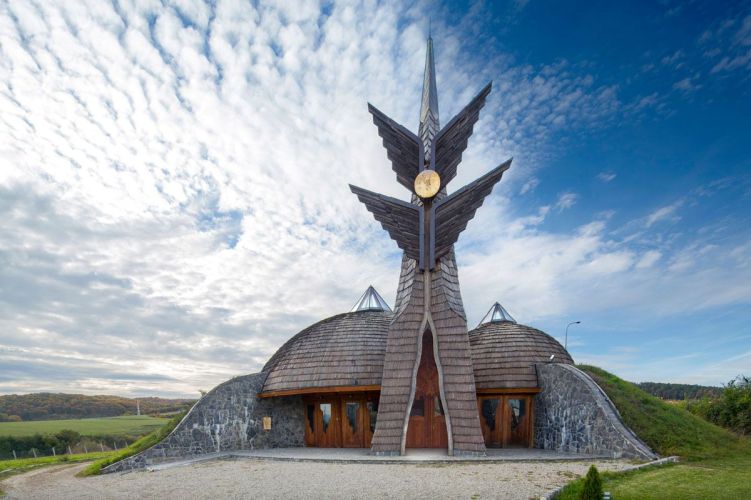 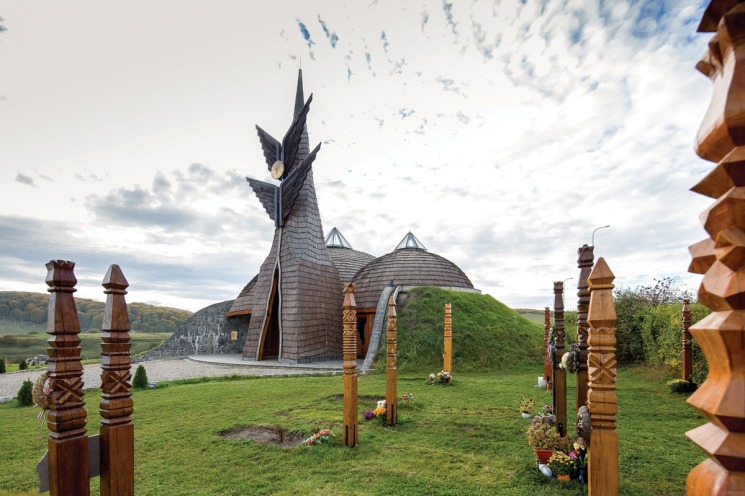 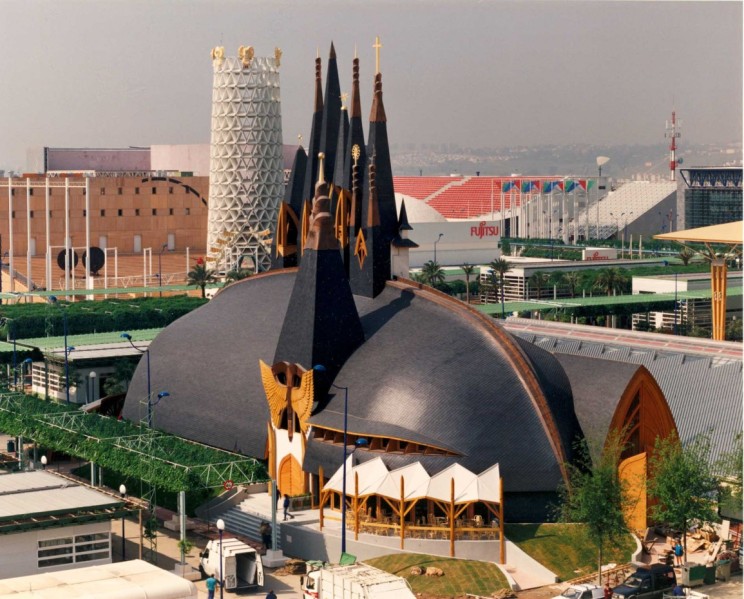 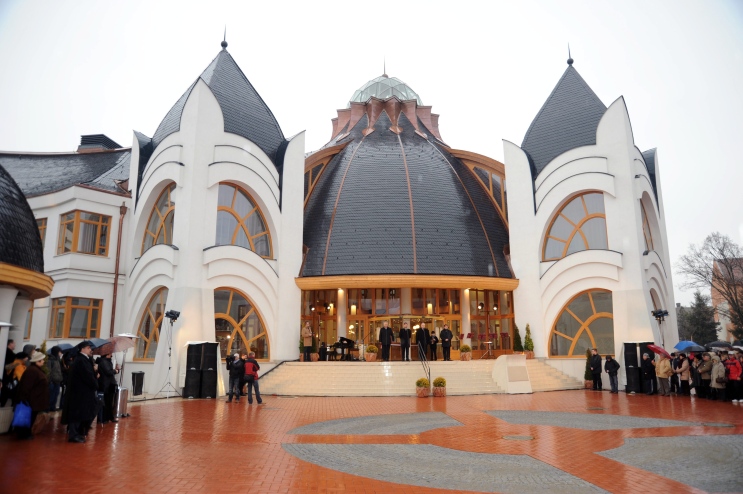 11 comments on “The Neo-Celtic Architectural Revival That Wasn’t”