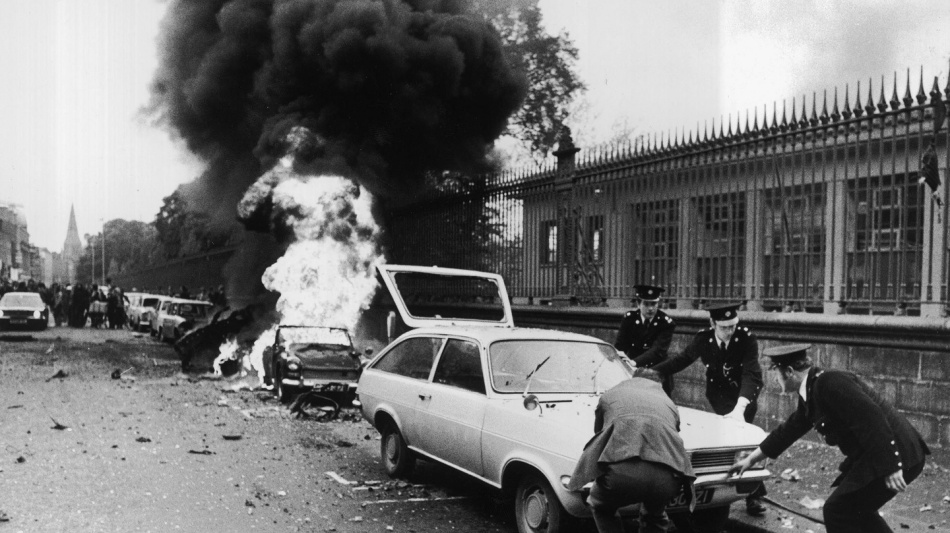 2016 may be the centenary of the Easter Rising of 1916, and some journalists employed by the main titles of the Independent News & Media organisation may be half-heartedly mimicking a more liberal tone, but the old hands of the IN&M newsrooms remain true believers in a manipulative view of Ireland’s history which makes savage natives of the Irish, and civilizing colonists of the British. So there is little surprise in discovering that Jim Cusack, the press group’s security correspondent, has lent a sympathetic voice to the claims that some parties hope will eventually whitewash the blackened memory of Britain’s infamous death squad leader, Robert Nairac. While serving as a UK intelligence liaison officer in the north-east of Ireland during the 1970s, a period of ferocious insurgent and counter-insurgent warfare, Nairac involved himself in a range of covert activities which resulted in the murders of dozens of Irish men, women and children by pro-British or “unionist” terrorist factions and the UK forces themselves. These killings included the thirty-four dead and 300 wounded in the near-simultaneous Dublin and Monaghan car-bombings of 1974 and the three dead and two injured in the Miami Showband Massacre of 1975, attacks claimed by an extremist grouping known as the Ulster Volunteer Force or UVF.

By the mid-1970s the “mid-Ulster” section of the UVF, the feared “Glenanne Gang“, had attracted a significant number of serving or former British soldiers and paramilitary policemen to its membership, while many of its operations were being directed by elements of the UK’s intelligence services. Robert Nairac was closely linked with the Glenanne faction, forming a friendship with one of its leaders, Robert “the Jackal” Jackson, a former soldier of the Ulster Defence Regiment, a British Army militia, and an agent of the Royal Ulster Constabulary through his association with then RUC Superintendent Harry Breen (the latter died in 1989 when his car was ambushed by (P)IRA in Jonesborough, County Armagh).

In 1977 Nairac suffered a particularly brutal death at the hands of the (Provisional) Irish Republican Army following a chaotic capture and detention in the border region of counties Armagh and Louth. His remains were disposed of in circumstances that have yet to be explained, one sensationalist tale from the UK press alleging that his corpse was taken to a pet-food processing plant to destroy any possible forensic evidence or to trick the British into believing that Nairac was still alive and had switched allegiances. Now a lecturer and researcher in Britain, Alistair Kerr, a former military officer, civil servant and diplomat, has produced a book allegedly exonerating Robert Nairac through new revelations about his whereabouts at certain key moments in his suspected terrorist career.

Unsurprisingly Jim Cusack has leaped on the supposed evidence, though he gives no indication as to whether he has or has not read the publication itself. Perhaps the mere existence of such claims is evidence enough? However to the more informed reader the newspaper report seems to be nothing more than an opportunity to polish the tarnished reputation of the “…young officer”, a chance to recast him as a tragic hero figure by appealing to facile sentiment. Whatever people may say about Cusack’s political motivations and journalistic style, he knows exactly what he is doing.

“A new book on British Army officer Capt Robert Nairac, killed and secretly buried by the South Armagh IRA 40 years ago, has debunked several of the ‘myths’ linking the soldier to atrocities during the Troubles.

The 28-year-old captain, considered an outstanding young officer, was shot dead after he was cornered and beaten by a group of men outside a South Armagh pub in May 1977.

Since then the military intelligence officer has been linked to, among other events, the Miami Showband murders in July 1975, the Dublin-Monaghan bombings in May 1974…

However, author Alistair Kerr, whose 474-page book on Nairac has been published by Cambridge Media Group, uncovered records which show the officer was not in Ireland at the time those atrocities took place.

In 1979 Nairac was awarded the George Cross, the highest ‘peace-time’ gallantry award.

The author said he hopes the book might help to convince those involved in shooting and secretly burying Capt Nairac to come forward with information about the whereabouts of his grave.”

While the Indo’s security correspondent may disparage the “myths” of Robert Nairac, others with less partisan sentiment see four decades of factual accounts and professional investigations by eye-witnesses and colleagues, journalists and historians, into the career of a ruthless killer. What they reveal is an arrogant Oxford-educated adventurer who thought himself more capable than his peers and who was given free licence to do as he wished in Britain’s rebellious first and last colony. In the end his own ego led him to the type of dreadful death that he – and his comrades – had so readily delivered to others.

By the by, does this comment on Nairac’s character come from the same Alistair Kerr as mentioned above?

I once met Nairac at Warminster in about 1973. He was a really impressive lecturer and did not use notes. However I cannot claim to have known him. He was murdered about four years later: I suddenly realised that I knew his face, which was now on the front covers of all the newspapers. Do you think that there is any truth in the rumours that he was gay? My suspicion is that he might have been, but was probably too religious and also too wedded to his army career, to do anything about it. (In those days you were kicked out if you turned out to be gay.) I think that he got most of his kicks from contact-sports like boxing: he quite liked being beaten up, and beating up others, in the ring. A bit of S & M, perhaps.”