Ian Miller is a British artist whose distinctive, sometimes surreal style will be familiar to many readers of Fantasy and fantasy-tinged Science-fiction even if his name is not so much. Since the late 1970s his exquisite illustrations, executed most frequently in pen and ink, have graced the covers of countless publications, notably the Fighting Fantasy and Warhammer range of books and magazines from the Games Workshop. Perhaps my favourite examples of his work come from “The Winter of the World”, a trilogy of quasi-historical Fantasy books by the Scottish author Michael Scott Rohan set – unexpectedly – on the North American continent during the last Ice Age. In general I disdain the endless catalogue of High Fantasy tales published over the last four decades, a conveyor belt of faux Mediaevalism inspired by the commercial successes of the “Hobbit” and the “Lord of the Rings” in the United States. Most are pale imitations of J.R.R. Tolkien or outright rip-offs (did anyone mention the “Sword of Shannara”?). All those Eddings and Jordans are as near to literary dross as it is possible to imagine, though thankfully there has been some light at the end of the tunnel in recent years with the emergence of writers like China Miéville and the popularity of urban-tinged fantasies (I haven’t read George R.R. Martin so I’ll reserve my judgement on his works. I will venture to say that they sound- the much heralded sex and gore to one side – distinctly traditional in both tone and setting).

However I was always impressed by Scott Rohan’s little series, despite its limitations and adherence to overly familiar formulae (the young hero unknowingly destined to greatness). Somehow his deft writing and commitment to an appealingly innovative pseudo-historic setting gave his publications a power that many other would-be fantasists would do well to take note of. I still have the books I first purchased in the late 1980s and In terms of literary merit I would place them well above many of their contemporaries, even those now regarded as “classics” of the genre. Unfortunately Michael Scott Rohan seems to have abandoned writing which is a great shame. By all accounts he was growing in his skills as a writer and one of his last works, the personally meaningful “Lord of Middle Air”, is particularly well-regarded.

However to return to Ian Miller, featured above is his 1987 cover for Scott Rohan’s “The Forge in the Forest”. It is perhaps not the best of his creative output but it is certainly one of my personal favourites. 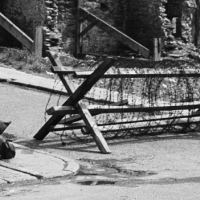