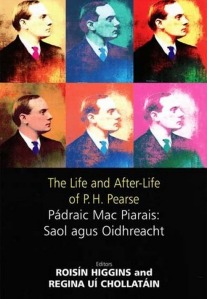 In the run up to the centenary commemoration of the 1916 Easter Rising a timely and much needed reappraisal of the man who has come more than any other to represent the Irish Revolution, and like the revolution itself what emerges is a complex, multi-layered and involving figure. Though some of the essays follow the so-called `revisionist’ or more correctly `apologist’ line of modern Irish historiography, and are unfortunately coloured with a certain degree of negativity in relation to the man often simply known as An Piarsach, the majority follow a much more generous and honest look at Pearse and his life and legacy.

The person that emerges is frequently at odds with the more conservative images that modern myth remembers and more in line with Dublin folklore and the personal accounts and recollections of friends and family, an individual by turns intelligent yet often naive, intensely shy but outspoken and masterly persuasive on certain subjects close to his heart, sometimes almost morosely serious yet frequently given to humour and playacting, ostensibly stern but more normally quick to kindness and charity.

The stereotype that Pearse’s often politically motivated and biased critics would love us to believe was the real man is well and truly erased from our minds as another altogether more rounded and human, and indeed attractive, figure emerges. Someone who can truly claim to have been one of the founders of Irish democracy and freedom and the modern nation state of Ireland. Highly recommended, and like Pearse himself a wonderful bilingual blend of Irish and English.

In addition some may want to read about the life and untimely death by drowning of Pearse’s would-be fiancé Eibhlín Nic Niocaill, whose loss had a profound effect upon Pearse and may ultimately have altered the course of his life, in ‘A Dark Day on the Blaskets: The Drowning of Donal O Criomhthain and Eibhlin Nic Niocaill on the Blasket Islands,13 August 1909‘.