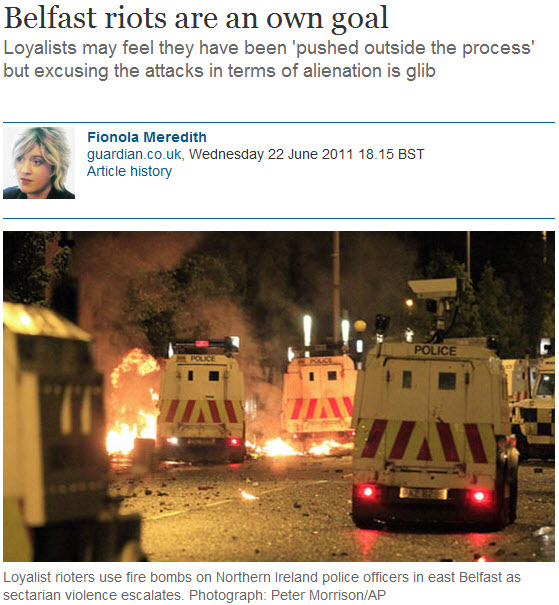 Journalist Fionola Meredith in the Guardian on some of the background to the UVF-led Unionist attacks on the Nationalist Short Strand enclave in East Belfast over the last two nights. In her opinion (echoed by others) the recent appearances of new Unionist paramiltary wall murals, banners and flags in parts of the city show that:

‘the skirmishes just down the road are not random or arbitrary outbreaks of inexplicable violence, as they may appear to outside observers, but the product of an increasingly visible loyalist rage. The appearance of tame-looking loyalist elder statesmen during Queen Elizabeth’s recent visit to the Republic gives no sense of the reality on the streets of inner east Belfast, where attacking their Catholic neighbours is a way for blood-hungry young loyalists to gain status and rank in the notoriously volatile command structure of paramilitary organisations.’

‘It’s true that there is a palpable sense of discontent in loyalist communities, a kind of resentful longing for the old days of pride and primacy.

Yet that’s rather too glib. It implies that mounting orchestrated and unprovoked attacks on Catholic neighbourhoods is in some way an inevitable outworking of loyalist victimhood – an argument that conveniently allows the perpetrators off the hook.’

As I pointed out here, there is far more to this story than the lazy, glib soundbites that some in the mainstream media in Ireland or beyond are trotting out. Reaching for the well-worn clichés of ‘sectarianism’ and ‘tribalism’ is to fundamentally misrepresent what has happened in Belfast and to obscure the underlying causes of the conflict in the first place. We are watching the final death spasms of Britain’s colonial adventures in Ireland and it is only by viewing the conflict in that light that one can begin to understand where we are now – and where we may be going.