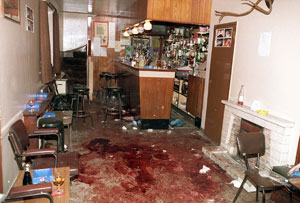 Incredible news today that an official investigation into the Loughinisland Massacre has concluded that there was no collusion or co-operation between Unionist terrorists and the Royal Ulster Constabulary or RUC, the disbanded former paramilitary police force in the North of Ireland. The 1994 attack on a local, rural pub in County Down resulted in the murder of six Irish civilians, including an 87 year old man, by gunmen from the British terrorist group the UVF. Since the killings speculation has been rife that RUC officers in the area covered up for and protected the terrorists. It has also been suggested the some members of the RUC were aware of the imminent attack before hand and allowed it to go ahead.

The report by the Police Ombudsman for Northern Ireland has concluded that, though vital physical evidence related to the crime was mishandled or destroyed and that no proper investigation was made into related Unionist terrorist activities in the region, there was no act of ‘collusion’ between the RUC and the UVF.

‘A report by Northern Ireland’s Police Ombudsman into the RUC’s handling of the Loughinisland atrocity 17 years ago has found there were failings in the police investigation into the murders.

Failures include the unauthorised destruction of the killers’ get-away car and the failure to investigate properly the link between the Loughinisland shootings and other terrorist attacks.

However, it said there is ‘insufficient’ evidence of collusion between the group behind the attack and the security forces.’

The Irish Times points out some of the failures in the original RUC investigation highlighted in the report including:

The car used by the UVF was improperly destroyed 10 months after the attack after lying outside a police station exposed to the elements.

Police failed to investigate properly the link between the Loughinisland shootings and other terrorist attacks.

That the Ombudsman’s can claim, in the context of the conflict in the North of Ireland and the notorious record of the RUC, that there was no collusion between the official and unofficial arms of Britain’s counter-insurgency war in Ireland is beyond belief.