It has been reported that at least 100 British Unionist rioters were involved in overnight clashes in the contested town of Portadown, as they attempted to attack the homes of the local Irish Nationalist community. Using the excuse of the removal of British flags by local families with the agreement of the PSNI (the paramilitary police force) in an effort to ease communal tensions, British militants gathered in the area, armed with petrol bombs and other improvised weapons, and proceeded to attack both the PSNI and Irish civilian families. According to UTV:

A total of 19 plastic baton rounds were fired during the trouble which continued into the early hours of the morning.

No police and no members of the public were injured.

It is believed social network sites and mobile phones were used to gather people from outside the area for what was originally planned to be a peaceful protest by residents over the removal of loyalist flags.

As the violence continued into the night, police advised motorists to avoid the Corcrain and Ballyoran areas, Obins Drive, Union Street and surrounding areas.

“What is known is that around 100 loyalists attacked police and attempted to attack nationalist homes in the Portadown area over several hours,” he said.

“I would appeal for calm to return to the streets of Portadown. I’m in no doubt that the vast majority of people, whether they are from the unionist or nationalist community want to see an end to this trouble. They want to see order restored and they want to be able to get on with their lives.”

Police have come under attack across parts of Northern Ireland in the past week.

Rioting already broke out in Portadown on Wednesday night, this time in the Garvaghy Road area.

In the early hours of Tuesday morning two police officers were injured after trouble also erupted in the Craigwell Avenue and Obin Street areas of the town.’

In something of an irony, the homes in the Irish Nationalist district of the town attacked by Unionists were in fact occupied by foreign nationals, as the Guardian notes:

“Around 100 loyalists attacked police who prevented them attacking nationalist homes,” said John O’Dowd, who is a member of the Northern Ireland Assembly.

The families from East Timor packed their bags and ran from their homes in Portadown, Co Armagh on Friday night, when the area was engulfed in violence, he said.

For several hours, police were attacked by people armed with petrol bombs, bricks, bottles, fireworks and other missiles in the latest violence surrounding the high point of the loyalist marching season.’

The recent trouble in the North of Ireland also witnessed similar attacks on migrants most of whom tend to live in ethnically mixed or Irish Nationalist communities. 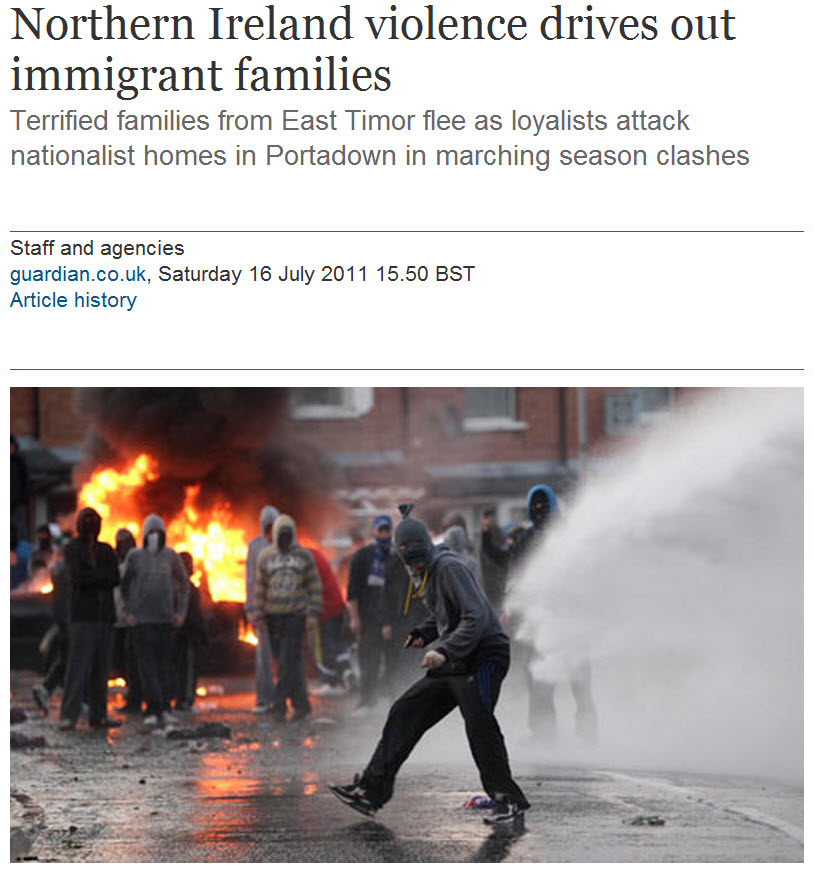