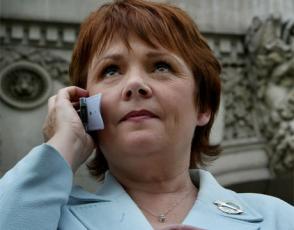 The campaign to see Dana Rosemary Scallon added to the list of candidates for the office of Uachtarán na hÉireann seems to be gathering momentum. As the Irish Independent reports:

‘Her brother John Brown said this week that the former MEP had come under great pressure from “various sections of society” to go forward. And in fairness she got more than 175,000 first-preference votes when she ran for the Presidency as an Independent in 1997, coming in third behind Fianna Fail’s Mary McAleese and Fine Gael’s Mary Banotti.’

Would that be the same Dana who was one of the key speakers at the 2007 World Congress of Families, as mentioned here:

‘Dana Scallon is a former entertainer turned politician who quickly gained a reputation for her single-minded focus on antichoice issues. In 2003, the misinformation she spread about an overseas development bill brought about almost unprecedented criticism from fellow MEP, Prionsias De Rossa. In a debate on the bill in Brussels, he said, “I want to hear her apologize to this House for the scurrilous lies that she told in the Irish media about this report: claims that EUR 50 million was being taken from Irish fishermen in order to promote abortion in the world; claims that Irish taxpayers’ money was going to be used for promoting abortion in the world. They are scurrilous lies that should be retracted. We should have an apology here tonight from Mrs. Scallon for promoting these falsehoods.”

Hmm. She had interesting company at this Christian fundamentalist event considering the other key speakers included several militant Roman Catholic leaders. For instance one of those was Vatican heavyweight Cardinal Alfonso Lopez Trujillo, a fierce opponent of Gay rights legislation – and condoms:

‘Since 1990, Cardinal Alfonso Lopez Trujillo has been president of the Pontifical Council for the Family. He is renowned for his extreme traditionalism and is a frequent speaker at conferences and events held by antichoice organizations. Trujillo regularly speaks out against family planning—that is, any methods other than those relying on Vatican-approved periodic abstinence or “natural family planning.” Cardinal Trujillo maintains an anti-condom stance even with regards to preventing the spread of AIDS, claiming that promoting “safe-sex” is like playing “Russian roulette,”

Cardinal Trujillo has made false and unscientific statements about condom use to prevent HIV and AIDS. The most notorious was perhaps during his appearance on a BBC documentary on the subject, when he claimed that “the AIDS virus is 450 times smaller than the spermatozoon. The spermatozoon can easily pass through the ‘net’ that is formed by the condom.” He has also claimed that promoting condom use is like playing “Russian roulette” with AIDS and that “safe sex” campaigns are dangerous because they increase promiscuity and give condom users a false sense of security.

These statements have drawn fierce criticism from reproductive health experts at the WHO, which called them “incorrect” and “dangerous” and that “consistent and correct” condom use reduces the risk of HIV infection by 90%.’

And how about the Slovakian zealot Anna Záborská?

‘A senior member of Slovakia’s Christian Democrats (KDH) and a member of the European Parliament for Slovakia (NR SR), Dr. Záborská has publicly identified herself as a conservative and stated intentions to pursue her conservative agenda within the European Union.  She is a prominent member of the Forum of Life, an association of Slovak antichoice NGOs, organizations and individuals and is radically opposed to equal rights for homosexuals, believing “AIDS is God’s vengeance for homosexuality.” In July 2004, Dr. Záborská became the chair of the European Parliament’s Committee on Women’s Rights and Gender Equality despite protest from other committee members who warned that, “her attitude is against the spirit of the committee” and “her views on abortion and homosexuality in particular could put her in direct conflict with what the committee is trying to achieve.”’

Some of Záborská’s choicer statements include:

‘AIDS is God’s vengeance for homosexuality’ [The Slovak Spectator, 26 July 2004]

‘I don’t want to discriminate against anyone, but with these people [homosexuals] there is the potential chance that their outlook on life in basic family matters, on male and female relations, could influence children.’ [The Slovak Spectator, 31 March 2004]

‘With regard to my comments in the Slovakian media… I was questioning myself if these people [homosexuals] should be teachers of my kids.’ [EUpolitix, 29 July 2004]

‘We want to protect the traditional family based on the marriage of one man and one woman.  We voted on this basis in the National Parliament but we want to proceed in the same way together with our partners in Europe, in the European Parliament.’ [SITA (Slovak Press Agency), 7 June 2004]

Lovely. Then there is Austin Rose:

‘…the president of the Catholic Family and Human Rights Institute and somebody who has been outspoken about a willingness to disrupt the workings of the United Nations. Ruse has boasted of his “veneer of support” for the UN and his willingness to break “every single rule of UN lobbying.” Ruse has also shown that he embraces extreme operating principles and lack of cultural sensitivity in pursuit of his goals at the UN: “When we finally convinced the Muslims that ‘forced pregnancy’ meant abortion and they rose up and they squashed it. You know, our whole game is to make the Muslims as mad as possible at the radical feminists. If that happens, we win. Nothing like a Muslim in full-throated outrage at a radical feminist from the United States.”’

‘Fr. Thomas Euteneuer serves as the president of Human Life International, an organization that has continuously courted controversy through extremist actions and statements, such as publicly accusing Jews of controlling the abortion-rights movement and calling sniper attacks on doctors who perform abortions “a superb tactic.” Euteneuer believes the church has found a new enemy, to replace the Soviet Union, and he travels globally (but especially through Eastern Europe) falsely portraying himself as a crusader against a “new totalitarianism” called “choice” or “reproductive rights.” His organization has scandalized many with racist positions and warnings that “Europe will eventually be dominated by Islam” and “Islam is overtaking Christianity” in Western societies. HLI was denied accreditation with the United Nations Economic and Social Council for its “attacks on Islam,” its position “against the purposes of the United Nations,” its “aggressive language” and the “issue of tolerance.”’

And last, but by no means least, yet another American Christian fundamentalist:

‘Carl Anderson worked with the U.S. government to ban abortion under Senator Jesse Helms before joining the Reagan administration where he helped craft the Global Gag Rule. In the late 1980s, he started work at the conservative Catholic group, the Knights of Columbus where he has worked since to increase the order’s involvement in the fight against abortion rights. He is currently the Supreme Knight of the Order, and has prioritized opposition to any sex education that stresses “biology, birth control, and diverse sexual lifestyles.”’

Wow. And we thought Gay Mitchell kept some questionable company? And what is with these Christians and their Dan Brown organisations? The Knights of Columbus, the Dignitatis Humanae Institute, the Iona Institute. I’m waiting for the day I have to write about the Knights Templar and a would-be candidate for Áras an Uachtaráin.

But there is more. Much more. For Dana Rosemary Scallon is a European patron of the World Youth Alliance. And guess who her fellow-patron is? Why, none other than our old Italian friend Rocco Buttiglione!

‘Rocco Buttiglione PhD (born 1948), an ultra-conservative Catholic who has been described as one of “Pope John Paul II’s closest friends and counsellors” and “the intellectual alter ego of Pope John Paul II,” has a long track record of supporting extreme positions on HIV/AIDS, women’s rights, immigrants’ rights, homosexual rights and reproductive rights. Buttiglione gained notoriety when he failed to secure a place on the European Commission as EU Commissioner for Freedom, Security and Justice after many Members of the European Parliament were outraged at some of the positions he took and comments he made on matters regarding equal rights.

At his European Parliament hearing, Buttiglione stated that, “The family exists in order to allow women to have children and to have the protection of a male who takes care of them. This is the traditional vision of marriage that I defend.” Later, when asked about homosexual rights, he said, “All are free to call me a bigot and intolerant, but I very freely define homosexual behaviour as an indicator of moral disorder.”

Dr.Buttiglione supports camps for asylum seekers and quotas for immigration into Europe and at the Convention that worked on the European Charter of Fundamental Rights, he submitted an amendment calling for exclusion of sexual orientation as a ground for discrimination—thereby permitting the conditions to exist for discrimination against gay people.’

Good for you Rocco. You certainly do get around, don’t you? Dana, Gay Mitchell, what interesting Irish friends and fellow-travellers you have. Makes you wonder what else is out there to discover?

Meanwhile some have been tempted to see all sorts of sinister goings-on in the downfall of Senator David Norris. According to the Irish Times:

‘The former partner of David Norris has contended that Israeli officials were responsible for disclosing details of his 1997 conviction for statutory rape.

Ezra Nawi dismissed denials from the Israeli embassy in Dublin that it was responsible for leaking the information. He said while the embassy may not have been involved, he had no doubt Israel was the source of the information.

Mr Nawi, an Israeli Jew who has campaigned for Palestinian rights, was imprisoned for three months in 1997 for the statutory rape of a 15-year-old boy in 1992.

The public disclosure of a letter of clemency written by Mr Norris on his behalf led to the Dublin University Senator ending his bid to stand in the presidential election later this year.

During the course of an interview with RTE Radio’s News at One , Mr Nawi accepted he was aware the boy was under the legal age of consent.

“I have not denied it. It happened. I regret it and I have paid my debt to society,” he said. He added that as he was involved in politics, it was a “very juicy story” for those who opposed his views.

Mr Nawi said the conviction was used by Israel against him all the time because of his activities on behalf of the Palestinian cause. But he decried its use against his former partner during the campaign.’

When the dust settles I think we’ll find that the origins of the leaks about Senator Norris and his involvement with the Israeli court case have entirely home-grown roots. Quiet frankly Seán and Síle Citizen should be far more worried about the influence of the Vatican in Áras an Uachtaráin than any amount of Mossad conspiracy theories.

With at least two hardline Roman Catholic candidates in the running for the office of the Uachtarán we potentially face a huge backwards step in the progress of our nation. Though the links between Gay Mitchell and Christian fundamentalist individuals and groups (and some in the US Tea Party movement) are beginning to be widely talked about we should not let Dana Rosemary Scallon escape equally close scrutiny for ties that stretch back even further than Mitchell’s. In these difficult times do we really need more God Worriers and Jesus Freaks cluttering up the Irish political landscape?

1 comment on “The Power Of The Vatican In Áras An Uachtaráin?”