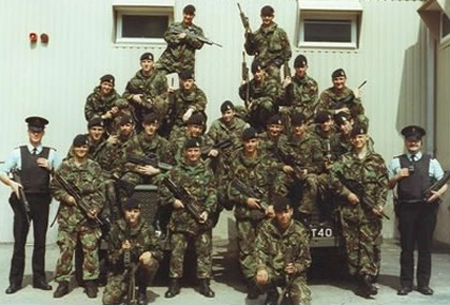 Sixteen years after the signing of the Belfast Agreement, thirteen years after the “reform” of policing, seven years after Sinn Féin took the office of deputy first minister and here we are in 2014 with the revelation that former members of the infamous Royal Ulster Constabulary are being employed by the British state to “vet” information demanded by the northern courts in relation to the RUC’s counter-insurgency operations during the Long War. From the Belfast Telegraph:

After the revelations at Belfast’s Royal Courts, PSNI Deputy Chief Constable Drew Harris denied there had been a cover-up.

He had been summoned there to explain why it has taken the force so long to hand over State files linked to nine deaths in the early 1980s.

Redaction of material – blacking it out – is usually carried out if there is a risk to a someone’s life or a threat of harm should their identity be made public. It usually applies to people such as police informants or soldiers.

The court heard the ex-Special Branch officers had been recruited to carry out the complex vetting process because they had the necessary expertise.

The classified investigations involved in the inquests were carried out by Greater Manchester Police Deputy Chief Constable John Stalker and Sir Colin Sampson, of West Yorkshire Police, in the 1980s but never published. More than 80 boxes of classified information is being held at a PSNI facility in Seapark, Carrickfergus, Co Antrim, where access to the documents is fiercely restricted.”

Despite nearly two decades of peace what passes for policing and justice in the British-administered north-east of Ireland still bears little resemblance to what is seen as the norm elsewhere in western Europe. The dirty secrets of the dirty war must be kept just that – secret.

Meanwhile we have news that several hundred British troops will be participating in the largest military exercises seen by Britain’s forces in Ireland since the 1990s. The people of eastern Derry will witness armed British soldiers playing out “war games” in and around the uplands of Binn Fhoibhne, a protected region officially designated as an area of Special Scientific Interest and Outstanding Natural Beauty. It seems that “demilitarisation” has quite different meanings when it comes to the Irish Republican Army versus the British Army. The fortified border-posts and checkpoints, pill-boxes and watch-towers may be gone but the Occupation Forces that manned them have not. This is not what the people of Ireland voted for in the referendum of May 1998. This is not what we were promised in return for amending our constitution. British soldiers on Irish soil will always be a casus belli and provocations like that planned for Derry merely serve to give that truism greater force.