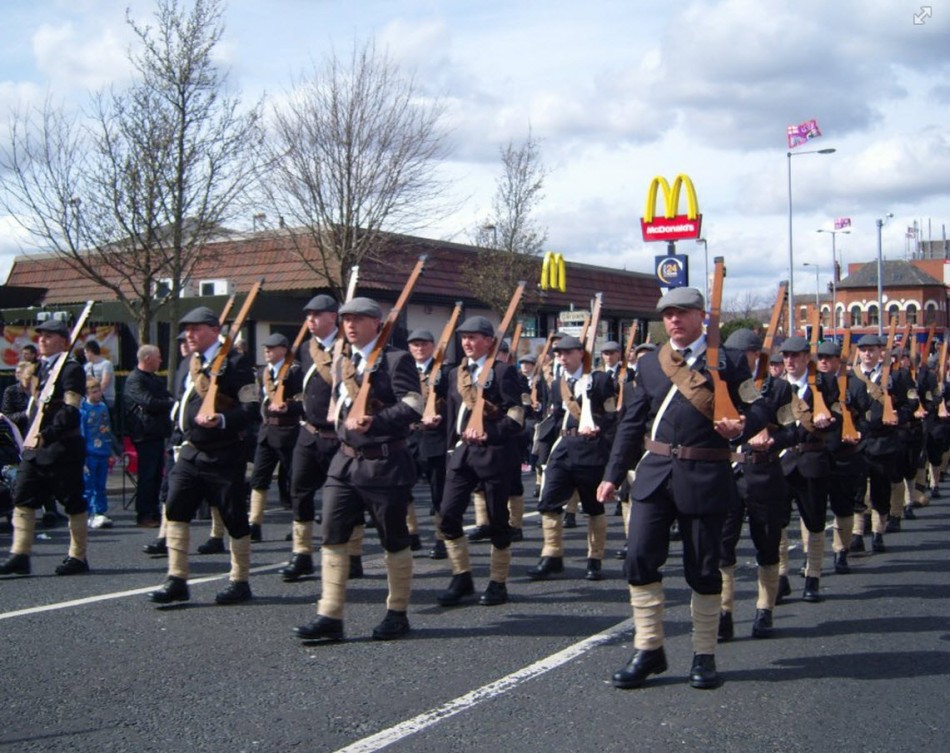 In the second decade of the 21st century the British people as a whole have little interest and even less regard for the last remnant of the British colony on the island of Ireland. There is hardly anyone in Britain, outside of the Far Right or ultra-nationalist Unionist contingents, who genuinely believes that “Northern Ireland” is an essential part of the so-called United Kingdom, let alone is in any meaningfully way actually “British”. Most well-informed Britons in their heart of hearts recognise their nation’s territorial and administrative presence in the north-east corner of Ireland for what it is: an early 20th century surrender to proto-fascism established and maintained through violence and the threat of violence (that is if they deign to give the matter any thought at all – which few do). Similarly those on this side of the Irish Sea who proclaim their “Britishness” through the mechanisms of Reformation-era sectarianism and racism are more widely seen in the “motherland” as an anachronistic hangover of a long-ago colonial age that few wish to be reminded of. Expecting the population of Britain to view members of the British Unionist minority in Ireland as fellow-citizens of the UK is like expecting the population of the Netherlands to view White Afrikaners in South Africa as fellow Dutch nationals. Whatever relationships may have existed in the past they are now regarded as just that – belonging to the past.

This is never truer than when it comes to Britain’s political and democratic contests. While the Conservative Party may have been willing to indulge the outliers of the “British nation” in the hopes of achieving short-term victories over their Westminster opponents during the darker years of the 20th century, such strategies more often than not have backfired on those who deployed them. The Tories are as mindful as anyone else that playing the “Orange Card” facilitated the liberation of the greater part of the Irish people and nation from foreign hegemony in the early 1900s, reducing that bloody suzerainty over our island to the present micro-colony of the “Northern Pale”.

However, in case some demagogues of the British Unionist minority in the rump “Kingdom of Ireland” need reminding, here is a smirk-tinged report from the Guardian newspaper:

“David Cameron is guilty of “ducking and weaving” on a ludicrous scale, by encouraging broadcasters to invite a “smörgåsbord” of political leaders to join the television election debates as he tries to avoid facing scrutiny, Nick Clegg has said.

The deputy prime minister… mocked Cameron after the prime minister called earlier this week for the Northern Ireland political parties to be invited to take part in the debates.

Ah yes, because in truth Britain’s deputy prime minister recognises that the idea of Unionist parties from the north-eastern corner of Ireland taking part in a series of political debates in the run-up to the next UK general election is clearly a nonsense because they – like their regional rivals – are Irish political parties and not British ones; no matter how vigorous their protestations or how disquieting their forced presence in the houses of parliament. Indeed who would want the Democratic Unionist Party, the monster raving loonies of European politics, anywhere near a modern, national television debate? Or a national government?