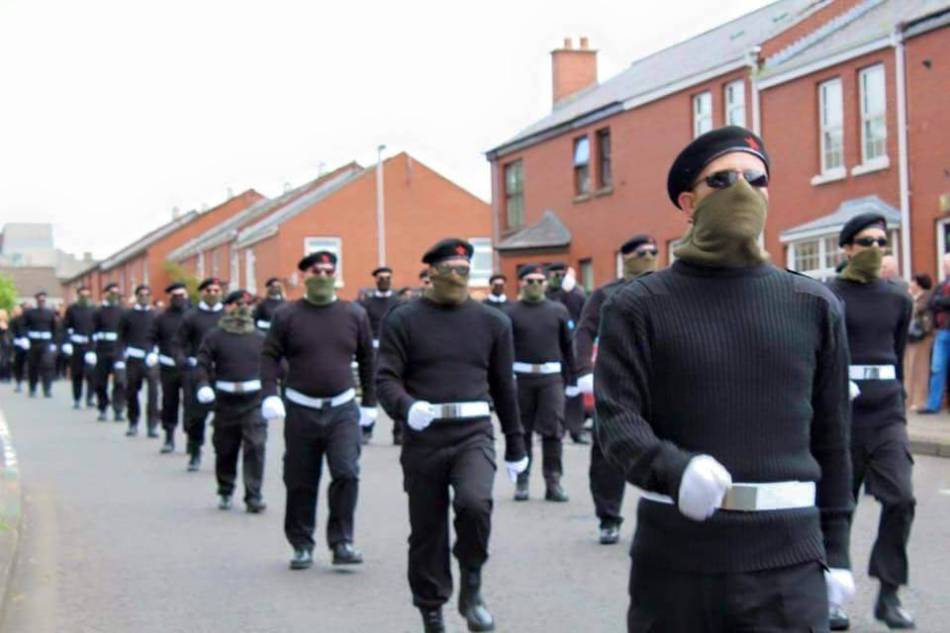 Following the recent death of Peggy O’Hara, the veteran political activist in the city of Derry, the Irish Republican Socialist Party and the Irish National Liberation Army – the IRSP’s largely quiescent military wing – staged an unusual public show of strength at her funeral, drawing much media attention and commentary. O’Hara was the mother of the late Patsy O’Hara, the INLA leader who died on hunger strike while confined in the infamous Long Kesh prison camp during the early 1980s, and was well respected in the region, even by her opponents (including some former friends and comrades). A large honour-guard of masked men and women accompanied her funeral cortège, while earlier in the week a volley of shots was fired over her coffin as it lay outside her home in Templegrove.

Putting aside the matter of her loss, and the obvious grief of her family and community, I was struck by the theatrics of the quasi-military display and the question of the intended purpose behind it. At the height of the 1966-2005 conflict in the north-east of Ireland such things were relatively commonplace. However since the early 2000s they have become the exception rather than the rule. Indeed the events of the week seemed to hark back  to republican funerals and demonstrations of the 1960s and ’70s more than anything else. Minus, of course, the lines of bellicose British paramilitary police and troops, followed by the inevitable street clashes stretching into the night.

Clearly the masked and “uniformed” activists with their sub-par parade ground marching along the streets of Derry were sending out a message, one aimed at followers, rivals and would-be adherents. Their presence may be another indicator of a changing, and perhaps generational dynamic in the Irish nationalist community in the Occupied North. The comparisons with the late 1960s may be closer than most would imagine – or fear.

Related to this, the weapons on display during the armed tribute to the late activist were interesting. Though detailed images and video are unavailable it seems that one of the INLA insurgents was equipped with a variant of the originally Russian-made SKS semi-automatic carbine (probably a local copy by a former Warsaw Pack satellite rather than one of the better known Chinese versions such as the SKS Type 56 carbine). His companions seem to be carrying two small semi-automatic pistols, neither of which are fired. All of the guns almost certainly come from old or reactivated arms dumps and are probably quite venerable. Despite growing – if still feeble – support we have yet to see modern weapons or equipment appear in the hands of any revolutionary republican organisations. All of them continue to draw upon the same accrued stockpiles of weapons that sustained the armed resistance during the latter years of the Long War. Which primarily means those of the (Provisional) Irish Republican Army.