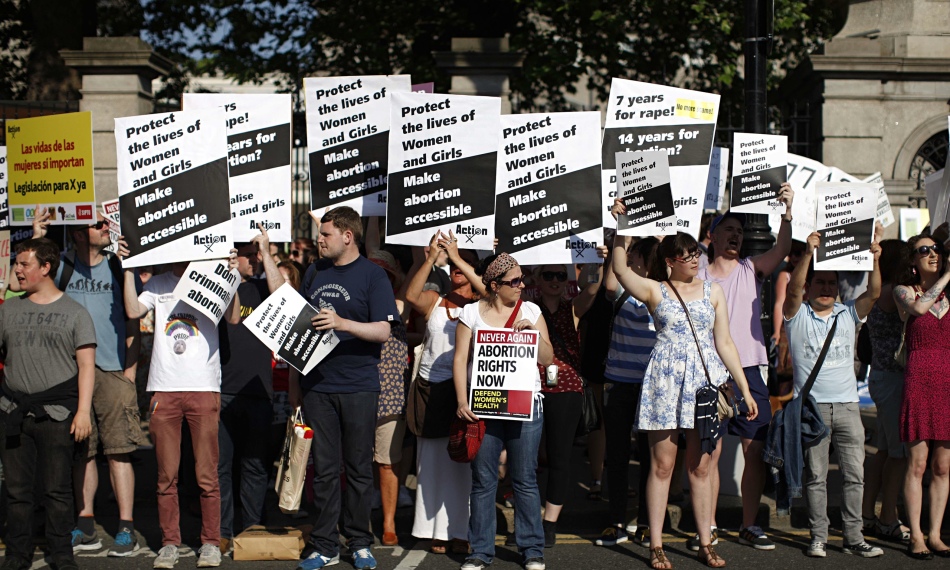 Over the last three years of writing the Sionnach Fionn blog there have been a number of subjects that have drawn vigorous responses from readers, both regular and passers-by. The continued British occupation of the north-east of our island nation, and the conflicts it has engendered. The place of the Irish language and Irish-speakers in modern Ireland and the discrimination they face in both the public and private spheres. The inequalities of our society and the pandering of the political and media classes to the needs of the few over the needs of the many; and so on. However no other subject has raised such passion and such contention as the issue of abortion. On most matters one can take a for or against viewpoint, or more often somewhere between the two, without recourse to violent language or sentiment. Yet abortion, in this country at least, makes people rush to partisan corners like no other. Some of the most hostile comments and messages I have received on ASF have been directly related to articles touching upon the effective denial of abortion services in Ireland. These have ranged from legal threats to death threats, the former backed by the American evangelical money of a well-known Christian lobbyist group. Some seem to believe that as long as the issue of unsought or life-threatening pregnancies can be safely exported abroad, by dispatching up to four thousand Irish women a year to clinics in the UK or the Netherlands, there is no need for further action. Or debate.

Which brings me to this insightful piece by Valerie Tarico, an American author and psychologist with a special interest in the meeting of religion and secularism in the United States. She raises a number of issues that though geared to the more complex US situation still have some application in this republic:

“If the top priority of the Pro-life movement actually were to end abortion, both tactics and results would be radically different. Imagine a fictional person whose chief life goal is to reduce abortion by, say, 90 percent over the next twenty years. This person might devoutly believe that every fertilized egg has a soul and that fetal demise is a tragedy; or he/she might simply think that abortion is an expensive, invasive, emotionally-complex medical procedure that should be made obsolete. Either way, this person believes that moving society beyond abortion is the most valuable cause to which he or she can devote a lifetime.

It might come as a surprise to the audience of today’s anti-abortion theater—but our protagonist’s goal is attainable. Armed with just the information and technologies available today, someone genuinely committed to reducing abortion by 90 percent in 20 years could map out a plan to get there—and even make people’s lives better in the process.”

This is something that I have argued myself, and most will be unsurprised to learn that the greatest mechanisms to end abortion are not legal bans or partial-bans but things as simple as comprehensive sex-eduction for teens and pre-teens, affordable and widely available contraception, lifting women, particularly young women, out of poverty, increased health and social welfare services (and benefits) for pregnant women and their families, enhanced maternity and paternity leave from employers, and perhaps most obvious of all, making a reality of the pharmaceutical El Dorado of an effective male contraceptive pill. In fairness we are perhaps more advanced on some of those issues than we used to be, and those relating to socio-economic challenges also gain some support from those on the Christian pro-life side of the argument. Ironically it is a few of the more secular, right-leaning advocates of the pro-choice position who bear hostility to increased spending on education, health and social welfare to promote successful child-rearing for the betterment of general society. In their case abortion is a solution to a problem other than pregnancy. Such is politics.

I suggest that you read Valerie Tarico’s article in full. While I personally remain pro-choice it presents a list of points that some anti-choice folk at home and abroad would do well to think about, and perhaps embrace.

5 comments on “Opposing Abortion Based On Fact Not On Faith”