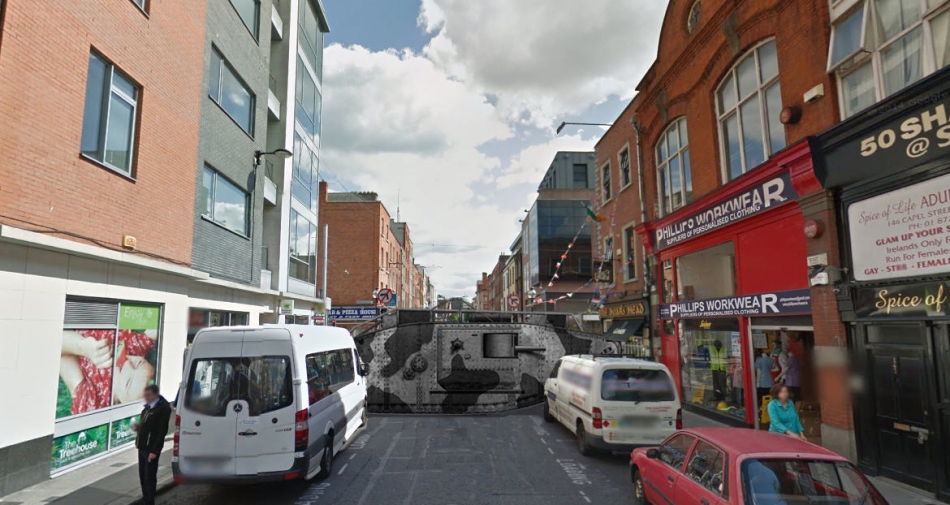 On the 13th of January 1921 a number of British soldiers manning a vehicle-checkpoint on O’Connell Bridge, the main river-crossing in Dublin city, opened fire on a crowd of men, women and children protesting their presence, killing two civilians and wounding five others. Exploiting subsequent unrest in the capital’s northside districts on the 15th of January the British Occupation Forces (BOF) sealed off a zone bounded by Capel Street, Church Street, North King Street and the Quays to carry out searches for arms and equipment belonging to the urban battalions of the Dublin Brigade, Irish Republican Army (IRA). Up to eight hundred troops and paramilitary police conducted destructive house-raids and arrests in the area, supported by armoured cars and tanks. On the 18th a second cordon was placed around the nearby Mountjoy Square district, confining its inhabitants within another zone. In both cases the results for the BOF were negligible, beyond further alienating an already hostile resident population.

The image above was taken at the time of the searches by a correspondent with Het Leven, a Dutch news magazine, at the junction of Capel Street with Abbey Street Upper (left) and Mary’s Abbey (right), facing south-east towards the River Liffey. Captured on January 18th it shows a British Mark V tank, fitted with an improvised ram, smashing open the doors of No. 148 Capel Street, the licensed premises of J. Behan (the Mark Vs were produced in two versions. The “Male”, which was armed with 57 mm guns and machine guns, and the “Female”, armed solely with machine guns. This vehicle is almost certainly the heavier Male class). The use of tanks or armoured vehicles to access sealed buildings was relatively common in the country’s major cities, Dublin, Belfast, Cork and Derry, though the practice was rarer elsewhere due to a scarcity of equipment. Dozens of British soldiers can be seen preparing to enter the premises, while at least two men (civilians or more likely plainclothes detectives from the infamous G Division of the Dublin Metropolitan Police) loiter in nearby doorways. The visible shop names are H. Williams & Co. at No. 25 Capel Street, a tea merchants and grocers, and Skeffington & Co. at No. 24, a confectioners; the latter is sharing the address with M. Egan. Next door to that, and possibly holding Nos. 23-21, is a premises signposted as Miller. The row of buildings at No.21-25 Capel Street are now a Spar Supermarket while the address opposite, No. 148, has become the Boar’s Head public house.

Note: This image is also found in the digital collection of the South Dublin County Libraries where it is mislabelled “British Army manoeuvre a tank across Capel Street near the junction with Mary Street, Dublin” and incorrectly dated to 1920.

7 comments on “A British Tank On An Irish Street”