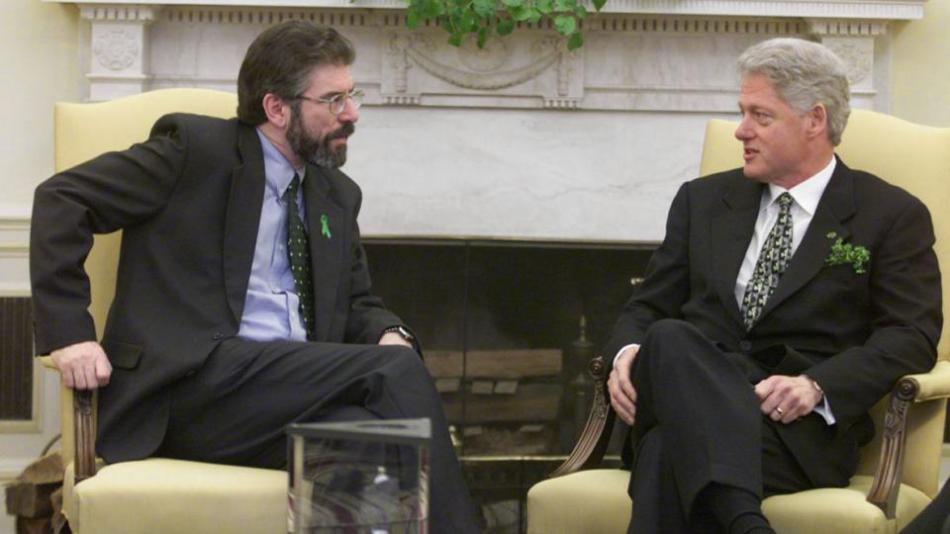 When the American news and current affairs website, the Daily Beast, needs a reporter to write a piece on Donald Trump’s attendance at a function welcoming the Sinn Féin president, Gerry Adams, to the United States in 1995, who do they turn to? Why none other than UK-born journalist Tom Sykes, self-described “Royal blogger” for the site and editor of its sycophantic “Royalist” articles. Sykes, who is married into the remnants of the old Anglo-Irish Ascendancy, the aristocratic British colonial class in Ireland, has written on Irish-related affairs before though not necessarily with any great historical insight – or lack of partisan feeling. Unsurprisingly this report follows much the same line:

“…Trump was a pivotal figure in a March 1995, $200-a-plate fundraiser at New York City’s Essex House hotel for the Irish Republican Army’s political wing, Sinn Féin, where the guest of honor was that organization’s best-known figure, Gerry Adams.

Indeed, as footage from the time shows, Adams singled out Trump for special notice, referring to him by name from the podium and breaking off his speech to shake the real-estate mogul’s hand.

The fundraiser took place during Adams’s second trip to America. He had been barred from entering the U.S. for many years, but President Bill Clinton granted him two separate 48-hour visas—despite widespread protest from U.S. and British officials—after the August 1994 Northern Ireland cease-fire agreement.”

Exactly. Gerry Adams, the democratically elected MP for West Belfast and leader of Sinn Féin, which was on its way to becoming the majority nationalist party in the north-east of Ireland, was in the United States as part of the delicate negotiations that took place in and around the early days of the Irish-British Peace Process in the 1990s, negotiations brokered by the Clinton White House. His visit followed the (Provisional) Irish Republican Army’s announcement of a “cessation of military operations” on the 31st of August 1994, and the perceived need to spur greater progress in the political talks with all sides to the temporarily frozen conflict.

“How Trump came to be at the fundraiser, and whether he was a significant donor to Sinn Féin, is unclear, however Irish Central alleges “his interest was piqued by his own Gaelic heritage.” Some claim he likely learned Gaelic as a child from his Scottish-born mother, Mary Anne MacLeod.”

Which is utter and complete crap, as anyone with even a passing knowledge of the time could tell you. How Trump’s vague, touristy interests in his maternal Scottish heritage could translate into support for a left-wing Irish liberation movement is a mystery known only to the less-than-reliable writers of the Irish Central.

“Of course, one man’s terrorist is another man’s freedom fighter, and these days Adams has rebranded himself as a regular politician. He is an Irish TD (member of parliament) and has been an important part of the peace process. He has, symbolically, shaken hands with British royalty.”

As if shaking hands with a British princeling was a passport to respectability? As for the re-branding claim, Gerry Adams has been an elected MP and TD at different stages in his political career for over thirty years. He has seen the passing of a dozen taoisigh, prime ministers and presidents in three different nations. His party is the second largest in the British occupied north of Ireland, and one-half of the regional power-sharing administration in Stormont, while nationally the polls make it the second or third largest party in terms of popular support across the country. It will certainly be the third biggest party in Dáil Éireann after next year’s Irish general election and one of the main voices of the Opposition in the Oireachtas if it does not enter into coalition government with other left-leaning partners.

“…there is little doubt that back in 1995, Adams was a pivotal figure and a key apologist for a terror campaign which had involved decades of bombing and shooting in Ireland and the U.K., leaving more than 3,600 dead and thousands more injured.”

Of course, in historical reality, there were less than 3600 fatalities from 1966 to 2005, and some 40% of those were victims of the bombings and shootings of the UK Forces and their counter-insurgency proxies, such as the UDA-UFF and UVF. Though you would certainly never glean that from Syke’s wording which implicates (P)IRA in all of the deaths and injuries incurred over the three decades of the Long War. Nor would one understand from the report that the number of civilians killed by the (Provisional) Irish Republican Army accounted for less than 35% of the fatalities the guerilla organisation inflicted. In contrast 51% of the fatalities inflicted by the British Occupation Forces, military and paramilitary, were civilians, while the state-sponsored pro-UK terror gangs recorded an astonishing 85% of civilian deaths among the fatalities they claimed responsibility for. Which of course was the purpose of the so-called “Loyalist” gangs in the first place, the terrorisers of Irish men, women and children, and why the likes of the militant UDA remained a legal British terrorist organisation under the UK’s remit for some twenty odd years.

The current estimate of civilian deaths out of total fatalities inflicted by the high-tech, trillion-dollar United States Armed Forces in Iraq since the 2003 invasion now stands at 40% over thirteen years (and that is the conservative figure). Which puts the twenty-seven year military campaign of the low-tech, million-dollar (P)IRA in a somewhat different perspective.

“So why is Donald Trump such a fan?

Perhaps it’s because although his role in the IRA and Sinn Féin may be a source of controversy, there’s one thing you can say with confidence about Gerry Adams: He’s definitely not a Muslim.”

You could also add that there is one thing you can say with confidence about Tom Sykes, the anglophile Daily Beast, and the US news media as a whole: they are definitely not disinterested players in the after-history of the Irish-British conflict of 1966-2005.

5 comments on “Donald Trump, Gerry Adams And The US Media’s British Blind Spot”