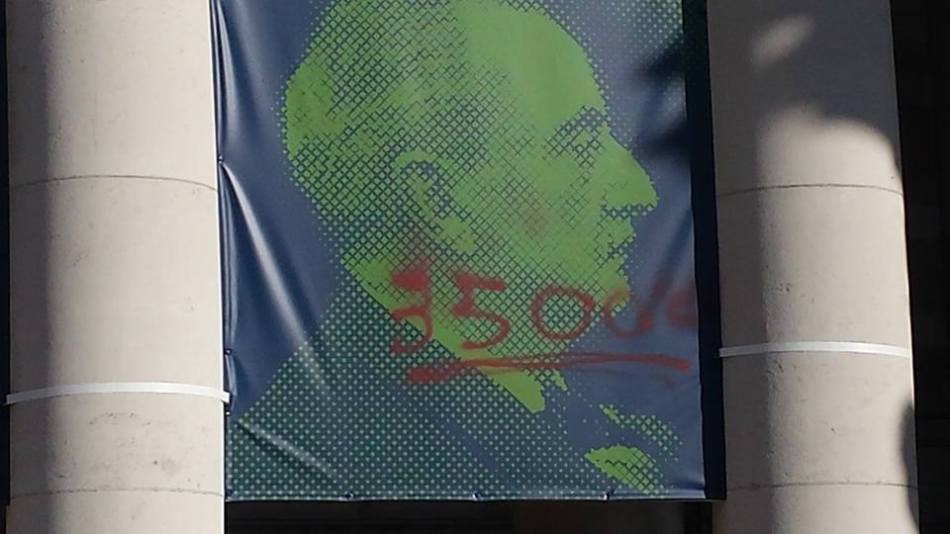 A quick update on the divisive 1916-2016 centenary banner erected by Dublin city council at the prominent Bank of Ireland building in College Green which features images of historical Irish politicians Henry Grattan, Daniel O’Connell, Charles Stewart Parnell and John Redmond. The inclusion of Redmond, the early 20th century leader of the Irish Parliamentary Party and its paramilitary wing, the Irish National Volunteers, has caused particular public disquiet given his loyalty to the British Empire and stated opposition to an independent republic in Ireland. Despite claims that the display was simply one of a number of commemorative events being staged in the capital by the council it soon emerged that the department of the Taoiseach had requested the hanging of the banner in its symbolically significant city-centre location.

However it seems that not everyone is prepared to tolerate, in the words of the academic Diarmaid Ferriter, “unhistorical shit” being foisted upon the Irish people. From The Journal:

The banner was erected earlier this month as part of the city’s 1916 commemoration programme.

Redmond, who condemned the Easter Rising, is one of four constitutional politicians pictured on the banner.

The group said it painted the figure 35,000 on the banner to represent the number of Irish people estimated to have died during World War I.

Misneach said it was opposed to Dublin City Council “trying to promote a narrative of the Rising that includes constitutional nationalists”.

One of its members previously tried to cover Redmond’s picture with a copy of the 1916 Proclamation but was stopped by security officials at the bank.

The group, which says it has no political affiliation, is understood to have defaced the poster after the building closed to customers yesterday.”

In its claim of responsibility for defacing the controversial banner, Misneach criticised those who were seeking to place conservative constitutional nationalists in the early 1900s on the same level as the progressive political forces which staged the Easter Rising of 1916. The group also highlighted John Redmond’s general hostility to the Irish revolution, women’s equality and trade unionism as well as his commitment to a war which resulted in the deaths of tens of thousands of Irish men.

Further reporting from Tuairisc and Nós.