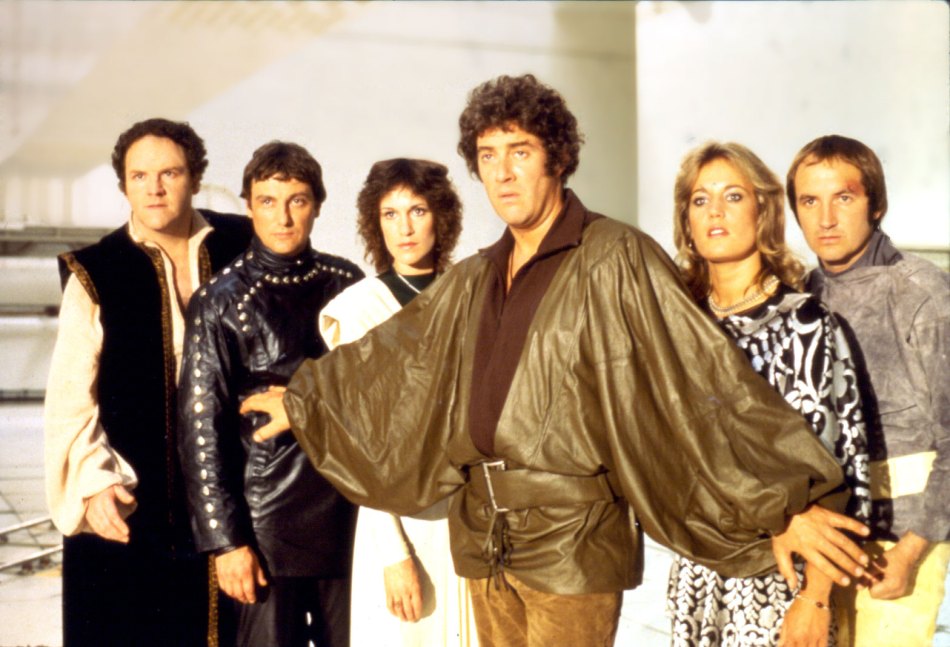 A quick post to note the passing last week of the seventy-one year old Welsh-born actor Gareth Thomas, who is best known within science-fiction circles as the eponymous star of the 1970s’ BBC television drama, Blake’s 7. Before landing the title role of Roj Blake in Terry Nation’s subversive sci-fi saga, Thomas began his career in 1965 with mainstream prime time series like the police show, Z-Cars, the dour melodrama, How Green Was My Valley, and the effectively creepy Children of the Stones, which has subsequently gained its own cult following. However it was Blake’s 7 that put the actor on the map for most of the general public in Britain and beyond. His performance as the anti-hero Blake was quite unlike anything else seen on UK television, as he played the morally ambiguous leader of a small group of renegades, dubbed Blake’s 7, fighting a tyrannical interplanetary state, the Federation. The supporting cast, particularly Paul Darrow (playing the wryly dangerous, and perennially popular, Kerr Avon), Michael Keating (the comic petty thief, Vila Restal) and Jacqueline Pearce (playing their chief opponent and über space vamp, Supreme Commander Servalan), were particularly brilliant, though there were some notably terrible exceptions among the other actors (Brian Croucher as Space Commander Travis took the meaning of “wooden” to a whole new level).

Riding the wave of enthusiasm for all things science-fiction that greeted the release of George Lucas’ 1977 movie, Star Wars, the television series ran for four seasons, from 1978 to 1981, with Gareth Thomas taking the lead for the first two before leaving the show when an opportunity opened up to join the Royal Shakespeare Company. However he briefly reprised his role in the third season and finally for the shocking last episode of the fourth season which seemed to bring the saga of Blake and company to an irreversibly violent end. In his later career Thomas worked regularly on stage and television, playing a guest role in a 2006 episode of the BBC’s moderately successful Doctor Who spinoff, Torchwood, before returning to his most iconic role in 2012 for Blake’s 7: The Liberator Chronicles, a series of audio plays for the well regarded Big Finish production company (if you enjoy podcasts and the like, the BF drama releases are highly recommended. I can’t begin to explain to you how many long days – and nights – at the office they have got me through).

A big thank you to WorldbyStorm over on the CLR for pointing me in the direction of these fascinating documentaries on Blake’s 7 recorded in 2003 and intended as extras for a BBC DVD release of the series. Due to legal and copyright issues they never made the cut, only three of the four documentaries being produced, and these were published on YouTube in 2014 by Kevin Jon Davies.