So in the space of three years we’ve gone from Irish-speaking citizens being arrested by the Gardaí for conversing in Irish to Irish-speaking citizens being forced from a job for conversing in Irish. The news and current affairs website, Tuairisc, reports that a young man from Corca Dhuibhne in County Kerry, a Gaeltacht or hibernophone region on the west coast, was allegedly forced from his job as a barman because he and other members of staff were occasionally communicating with each other in the Irish language.

According to Tuairisc (and other media), Cormac Ó Bruic was warned on the 5th of August by the owner of the Flying Enterprise Complex, a bar and restaurant in Cork city-centre, that the establishment was “English-speaking” only and that the use of his native Irish during working hours was forbidden. Understandably the Gaeltacht man refused to work under the discriminatory conditions placed upon him and other employees at the company and left the premises, taking time to decide his future at the business. Consequently on the 11th of August he was notified by post that he had been given his P45, effectively confirming that his contract of employment had been terminated. In support of the company’s position the proprietor, Finbarr O’Shea, claimed that there had been complaints from customers who felt “uncomfortable” with Irish being spoken in their presence, even to other guests.

The owner of the Flying Enterprise Bar & Restaurant has since stated that his firm employs a multinational workforce and that if staff members were allowed to use their mother tongues the company would be unable to operate. Because of that supposed worry and its function as a “hospitality business” the decision had been taken to make English the only permitted language on the premises, a situation compared to a form of “dress code“. When it was pointed out to Finbarr O’Shea that Irish was legally the national and first official language of Ireland his dismissive reply was: “We’re all Europeans!”.

Presumably that is strictly English-speaking Europeans.

The behaviour displayed in Cork is disgraceful, creating a hostile working environment for an Irish-speaking individual so that he feels the need to leave his job. It adds further weight to the need for a well-subscribed “fighting fund” for the Irish language which will litigate Anglophone opponents of Hibernophone rights into submission. Equality is never willingly granted by those who control it. It is forcibly taken by those who seek it!

Update: To clarify, Cormac Ó Bruic left his job on the day in question to consider his position when it became clear that no agreement was possible with the management of the Flying Enterprise Complex. The Irish Times has more details:

“Speaking this afternoon, Mr Ó Bruic described how he and his colleagues worked long shifts at the bar but that he had never had any difficulties with the owner.

“He respected me and I respected him. We were very friendly with each other – he had time for me and had faith in my ability to do the job well.”

The Kerry native said Mr O’Shea often heard him speaking in Irish with a colleague but never said anything.

Mr Ó Bruic said he was approached by the owner’s wife on August the 4th who told him he had to stop speaking Irish.

“This surprised me. I put my head down and went back to work,” he said.

The following day, Mr Ó Bruic said he went to work as normal at 5pm and was asked to meet with the owner.

He said Mr O’Shea said he was the director of the company and was giving him an order and that he (Mr Ó Bruic) was expected to obey it.

“I said I wasn’t going to stop speaking in Irish,” Mr Ó Bric said adding that he was then threatened with suspension. Mr Ó Bruic said he challenged the business owner to suspend him but said that he would not stop speaking Irish.

“I was shocked and upset. No-one should say that to anyone,” he said.

Mr Ó Bruic said he was upset and told him he could not work that night. The bar manager then asked whether he should be included on the following week’s roster, he said.

Mr Ó Bruic said that before he could, he was subsequently informed in a letter from owner, Finbarr O’Shea on 11th August that he was being given his P45.

According to Mr Ó Bruic, Mr O’Shea said in the letter that he (Mr Ó Bruic) had been warned on August 5th that The Flying Enterprise was “an English speaking business” and he had no permission to speak Irish in the pub.

Mr Ó Bruic said he was told in the letter there had been a number of complaints from customers who felt “uncomfortable” with him speaking Irish in the bar.

He said Mr O’Shea also stated in the letter staff working in the bar and restaurant were multinational and if he gave permission to every staff member working there to speak in their own native mother tongue, “the business couldn’t operate”.”

Update: The management of the Flying Enterprise Complex have released a statement vigorously contesting Cormac Ó Bruic’s version of events last August. In their view the employee was neither fired nor dismissed but instead chose to quit his job before HR procedures had been completed. 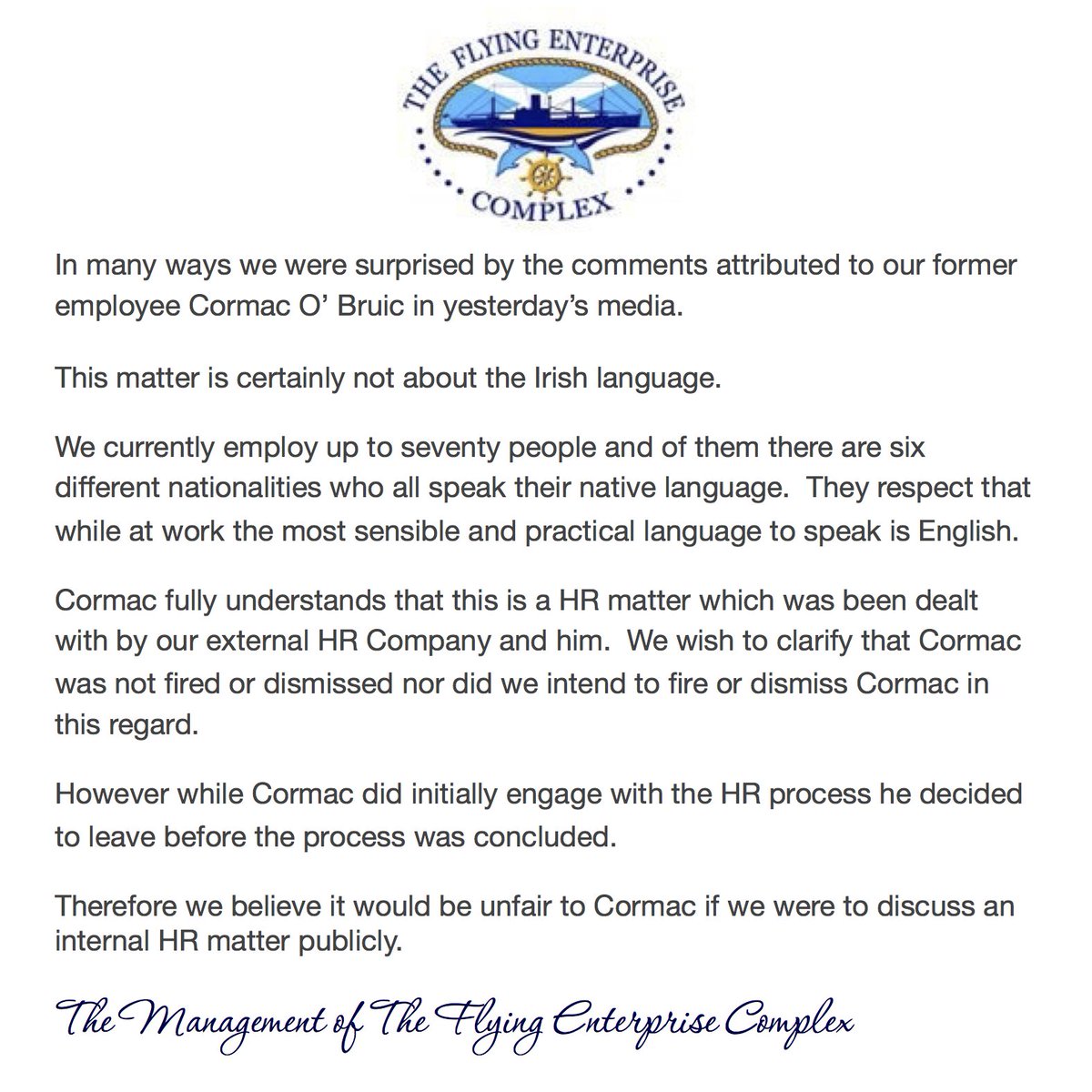