In early 2009 the deeply controversial Italian prime minister, Silvio Berlusconi, launched a campaign to tighten his control of the country’s press. Beset in scandals relating to adulteress affairs, allegations of sexual assault, business corruption and political patronage, the populist politician sought to silence his journalistic critics by intimidating them. As the UK’s Independent newspaper noted at the time, to say that Berlusconi:

“…would like to control the Italian media, and to a large extent actually does, is hardly news. But last week saw him trying to rein in the foreign press too, and finding it rather more difficult.

Berlusconi is a media magnate who owns three of Italy’s national TV channels and, as prime minister, has a dominant influence over the public broadcaster, RAI. He and his family own a couple of daily papers, one of the two main news weeklies and the country’s biggest book publisher, Mondadori. He has been an active politician since 1994 and on the fringes since the 1960s. Despite this experience, his media management over the past month has been comically amateur.

He cannot stand losing face and a lot of his supporters would not forgive him for making Italy look stupid or worse, louche.

The counter-attack against the foreign press has been three-pronged. Berlusconi has claimed that the foreign press are part of a plot orchestrated by the centre-left La Repubblica and the left wing Unita. British readers will be surprised to learn that the FT, The Times and The Economist are dupes of the left. At a press conference last week, Berlusconi refused to take questions from Repubblica and Unita journalists. Il Giornale, one of his family papers, has poured scorn on foreign journalists and their papers, particularly the British, who never get nearer to the corridors of power than fancy restaurants and radical chic terraces. Finally, the Minister of Foreign Affairs, the normally suave and anodyne Franco Frattini, attacked “bad” and “dishonest” foreign journalism which just deals in gossip.”

Some of that bullying style of political leadership should sound familiar to regular readers of ASF because the above scenario is the likely future shape of relations between the United States’ press corp and the presidency of Donald J. Trump. As reported by the New Yorker magazine a quite extraordinary meeting took place yesterday at Trump Tower in Manhattan when representatives of the media were summoned to a supposed press conference with the Republican Party’s president-elect. Instead of interviews or discussions the real estate mogul delivered a hectoring twenty minute lecture to the gathering while flanked by his senior aides Kellyanne Conway, Stephen Bannon, Jared Kushner and Reince Priebus. Around two dozen anchors and executives from CBS, NBC, CNN and ABC, including Lester Holt, Chuck Todd, Wolf Blitzer, Gayle King, David Muir and Martha Raddatz, attended the event and the reaction was generally one of shock and dismay.

“Trump whined about everything from NBC News reporter Katy Tur’s coverage of him to a photograph the news network has used that shows him with a double chin. Why didn’t they use “nicer” pictures?

For more than twenty minutes, Trump railed about “outrageous” and “dishonest” coverage. When he was asked about the sort of “fake news” that now clogs social media, Trump replied that it was the networks that were guilty of spreading fake news. The “worst,” he said, were CNN (“liars!”) and NBC.

Participants said that Trump did not seem entirely rational about his criticism of the media, nor did he appear any more informed about policy than he had been during the campaign. When one participant pointed out that all Presidents and Presidential candidates believe they get bad press, Trump said, “Not Obama!””

As I said before, Trump is destined to be America’s Silvio Berlusconi not its Benito Mussolini and the authoritarian demagogue is laying down the new ground rules early. 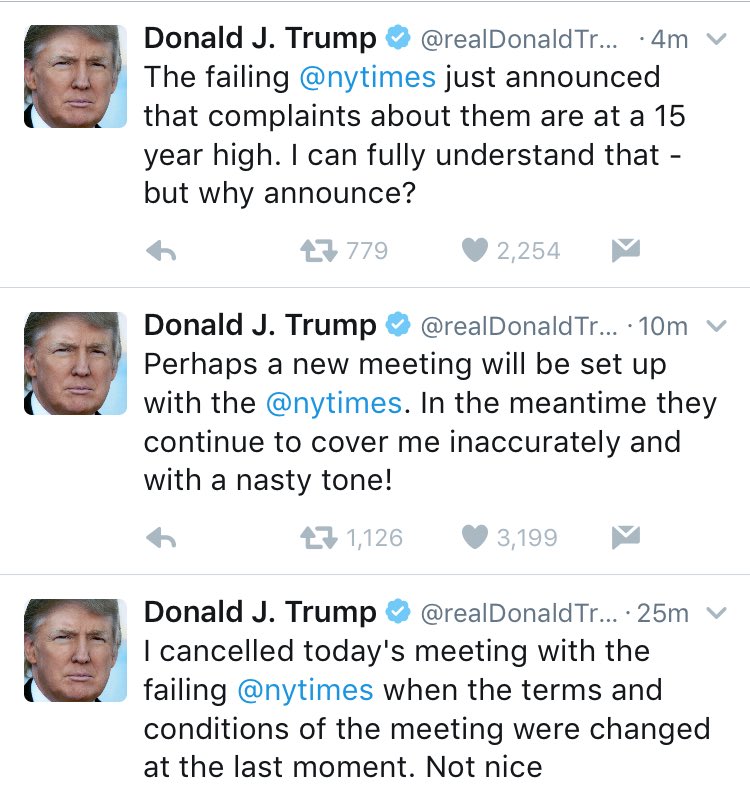 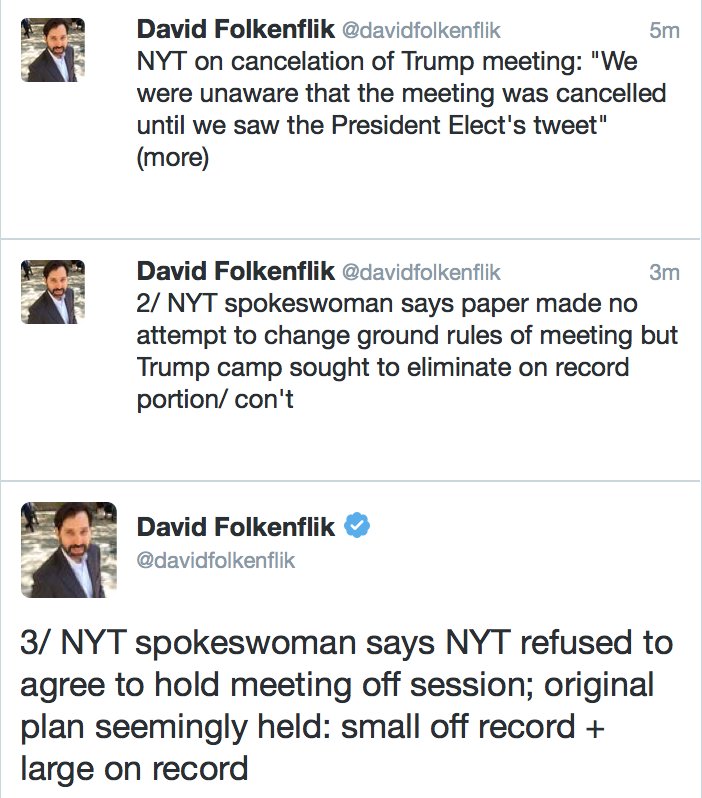