Given the poor overall result for unionism in the regional election to the assembly at Stormont, many commentators expected Arlene Foster, the troubled leader of the Democratic Unionist Party, to express some regret about her contemptuous behaviour towards the Sinn Féin half of the power-sharing executive or indeed the wider nationalist community. Her vow to stage a “bitter” election, one reeking of hibernophobic sentiment, backfired spectacularly, leading to a resurgent vote among northern nationalism. This lifted SF and the Social Democratic and Labour Party to unprecedented levels of support, placing pro-unity and pro-union representatives on a near level pegging. However, far from expressing contrition the Fermanagh politician seems eager to compound her problems – and to further destabilise the hard won peace of the last two decades – by seeking a pan-unionist anti-nationalist axis to possibly contest a further round of elections.

From a plea by Foster published in today’s unionist-leaning Belfast Telegraph:

No one should be surprised with the outcome of the election. For the last six weeks we warned how close the election would be. We warned that there was a real chance that Sinn Fein would emerge as the largest party and they almost did. In fact, Sinn Fein finished only one seat behind the DUP and secured just over 1,000 fewer votes.

We must accept and recognise the fact that the DUP fought the election in the most difficult of circumstances. In the months leading up to the election, we were being assailed on all sides from political opponents and the media alike.

This election has undoubtedly been a wake-up call for unionism.

We must not only hold the vote that we already have, we also need to expand to the next generation of voters. That is both in terms of first preference votes and also in terms of our capacity to win transfers.

Ideally, I would like to see a renewed attempt to create unionist unity where the parties would come together.

Failing that, we need to agree transfer pacts where unionists transfer down the ballot paper to each other.

The DUP boss sought to stir up ethno-sectarian passions during the recent election and the voters of the Six Counties delivered her – and unionism in general – a resounding slap in the face. Her response? To double-down on the Trumpesque appeal to ethnic-baiting while attacking the press and other critics. If Foster believes that a second regional election this year will favour her grey-haired party and geriatric unionism as a whole she is even more deluded than previously assumed. 2017 is not 1917 and the Good Friday Agreement is not a Home Rule Bill. 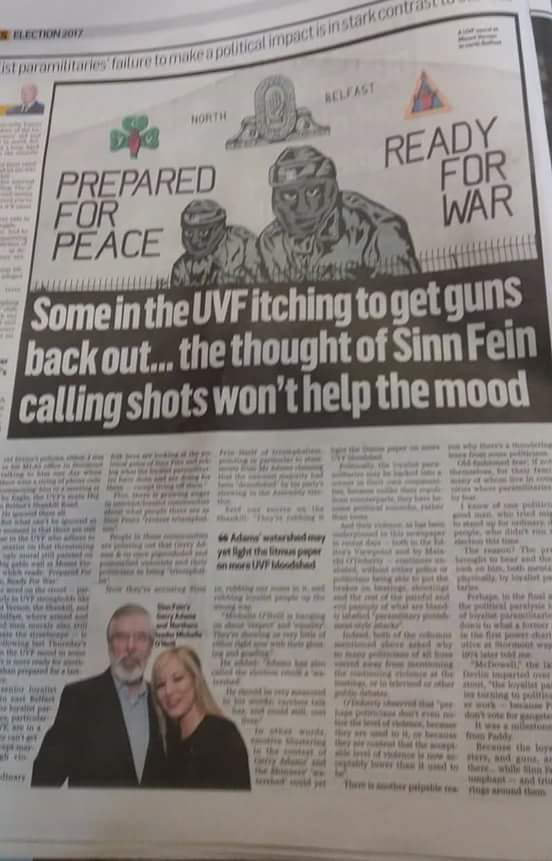