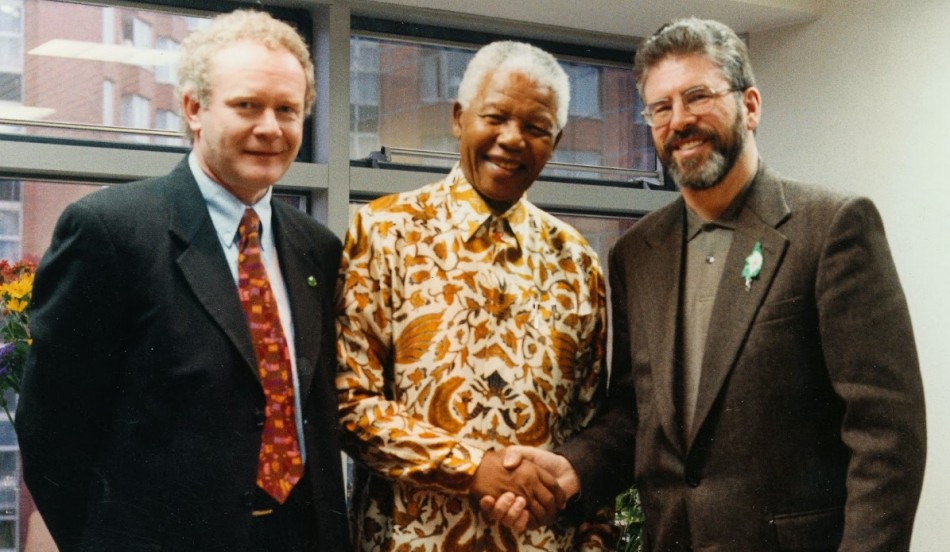 Though not entirely unexpected, the announcement of Martin McGuinness’ premature death through illness is still shocking in its own quiet way. For many republicans his decades long presence on the national stage, be it as a revolutionary or a politician, was a familiar and reassuring one. If Tom Barry or Liam Lynch were seen as symbols of resistance against foreign colonial rule at the start of the 20th century, then the Derry man was seen by many as their counterpart at the end of the century. Fifty years may have separated their respective struggles but the cause remained broadly the same.

Baptised James Martin Pacelli, McGuinness grew up in the city of Derry in the British occupied north-east of Ireland during the 1950s and ’60s. His late teens coincided with the emergence of the Irish civil rights movement as the northern nationalist community protested the system of ethno-sectarian apartheid imposed upon it by the ruling unionist regime at Stormont. Unfortunately the demonstrations and marches of the period were met with violence and persecution. By the summer of 1970 a fully-formed armed insurgency had emerged from the failure of peaceful protest to drive substantive change in the Six Counties. It was during this latter period that the teenage McGuinness found himself drawn to those protecting the nationalist enclaves of Derry from the depredations of the Royal Ulster Constabulary (RUC), the regional paramilitary police, and various pro-British terror gangs.

Sometime between 1969 and 1971 McGuinness was sworn in as a volunteer or soldier of the Derry Brigade, (Provisional) Irish Republican Army. Rising through the ranks he reached the position of brigade-adjutant in 1972, regarded by many as the unit’s second-in-command. Within a year he was serving as the city’s brigadier, the officer commanding (OC) the IRA in the region, with close ties to the General Headquarters (GHQ) Staff in Dublin and the ruling Army Council above that. McGuinness’ prominent position qualified him for inclusion on the Irish republican delegation flown over to Britain on a military transport plane in 1972 for peace talks with the then UK government of prime minister Edward Heath (the covert negotiations took place under the aegis of an agreed ceasefire which was broken by the British army during an attack on nationalist refugees being rehoused in Belfast).

By 1974 he was serving as the Director of Operations with the GHQ Staff, adding the position of general officer commanding (GOC) of the newly formed Northern Command in 1975-76. This was a key position as the Republican Army reorganised itself on the basis of cellular battle groups known as Active Service Units rather than the old system of territorial sections, companies, battalions and brigades. The success of this wartime transition saw McGuinness gain a promotion in 1978 to the all-important role of chief of staff (CS), effectively the head of the IRA as whole, answerable only to the policy-makers on the Army Council (which automatically granted him a seat). This placed him in the company of the most important activists within the guerrilla movement, including the adjutant-general (AG) and the quarter-master general (QMG), both sitting on the Army Council, as well as nine other members of the GHQ Staff, including the directors of Operations, Intelligence, Engineering, Finance and Publicity.

In 1982 McGuinness decided to successfully stand for election as a Sinn Féin candidate in Derry during an early attempt to establish a reformed regional assembly in the north-east of the country, largely initiated by a frustrated and despairing British government. At the insistence of a majority on the Army Council, the Derryman resigned his position as chief of staff, though he retained his senior rank within the Army. However this early test of the electoral system, coupled with previous successes of the H-Block or Hunger Strike candidates in the early ’80s, proved to many republicans that a dual strategy of “Armalite and ballot box” was the way forward.

Around 1985-86 McGuinness once again returned to the role of GOC Northern Command, having served temporarily as the adjutant-general, directing a major increase in operations by the IRA. The military offensive of the late 1980s and early ’90s coincided with his role as a central figure in “back channel” negotiations between the Republican Movement and the UK, eventually leading to the carefully choreographed Irish-British peace process. Without his steady and influential presence it is doubtful that the thirty-year armed struggle of the Irish Republican Army would have come to a relatively disciplined and ordered end, beginning with the ceasefires of 1994 and ’97, and the final cessation announcement in 2005.

Throughout his revolutionary career, as British governments and prime ministers, generals and secretary of states, came and went Martin McGuinness, like his comrade Gerry Adams, remained and endured. In the words of the Irish republican motto:

In the end, only death itself could defeat the undefeated freedom fighter from Derry.