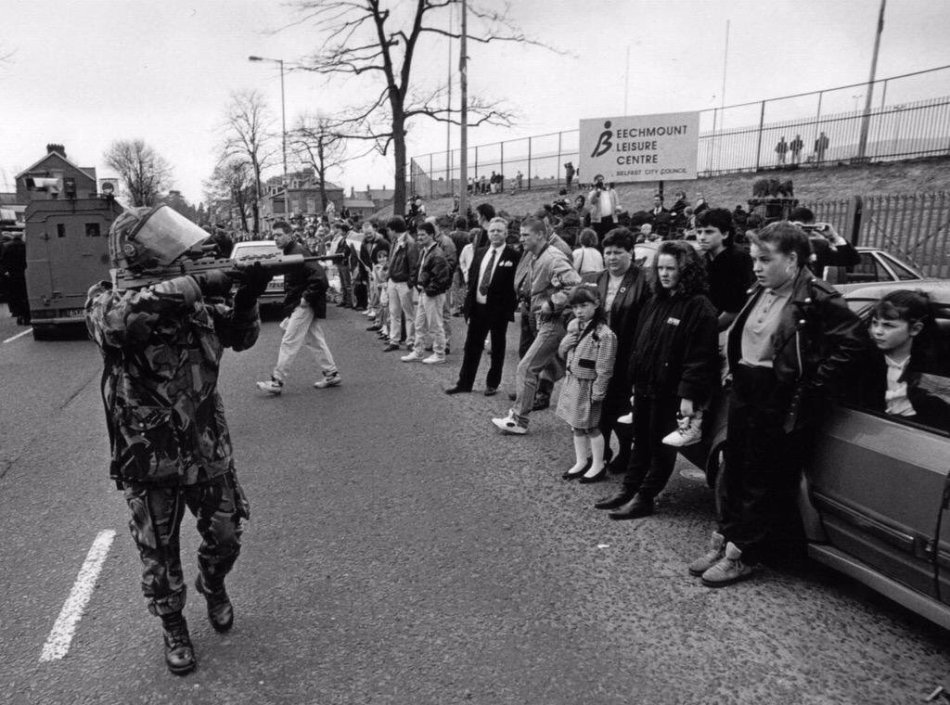 With the political and press establishment in the United Kingdom racketing up its protests against any attempt by the regional authorities in the Six Counties to bring members of the UK’s military, paramilitary and intelligence services to court for their crimes during the British “dirty war” on this side of the Irish Sea, here is Karen Bradley, London’s absentee Secretary of State for Northern Ireland, answering a question from a parliamentary committee in Westminster:

Emma Little Pengelly, DUP MP: Well over 90% of the murders and injuries caused during the Troubles in Northern Ireland were caused by acts of terrorism. Very few prosecutions and investigations are underway, innocent victims are being left behind with thousands of unsolved cases. When is the Secretary of State going to address this issue and put in place a mechanism to investigate the over 90% of acts of terrorism that caused those murder?

Karen Bradley, Conservative MP: Well, Mr Speaker, the honourable lady sets out the figures very, very powerfully. Over 90% of the killings during the Troubles were at the hands of terrorists. Every single one of those was a crime. The fewer than 10% that were at the hands of the military and police were not crimes. They were people acting under orders and under instruction and fulfilling their duties in a dignified and appropriate way. I look forward to working with her more to ensure that we can deliver the much-needed reforms and changes that we all want to see.

So, the UK government’s contribution to a peace process already destabilised by its reckless actions over Brexit is to continue the prosecutorial war against Irish veterans of the 1966-2005 Troubles while ensuring that British veterans are given some form of legal amnesty? To continue the United Kingdom’s investigations into the conflict, the arrests, the detentions, the use of internment-by-remand, and the issuing of extradition warrants as if the struggle was still raging, while labelling the military massacres of civilians during the likes of the Ballymurphy and Bloody Sunday atrocities as examples of soldiers simply following orders?

Karen Bradley’s words – and her subsequent non-apology – have sparked outrage in Ireland; and mystification in Britain at the Irish outrage. Which is indicative of just how far apart both island nations are in their collective view of the history of the Troubles. Simon Coveney, the Tánaiste and Minister for Foreign Affairs and Trade, has requested a meeting with the British minister and her officials to discuss the matter, though calls in Dublin and Belfast for the Tory MP to resign from her post seem unlikely to carry much weight in London.

Unfortunately, Britain’s views and opinions in relation to its contested legacy colony in Ireland, from the Troubles to Brexit, will always reflect the worse excesses of the British character, until that rancorous outpost of empire is finally gone.