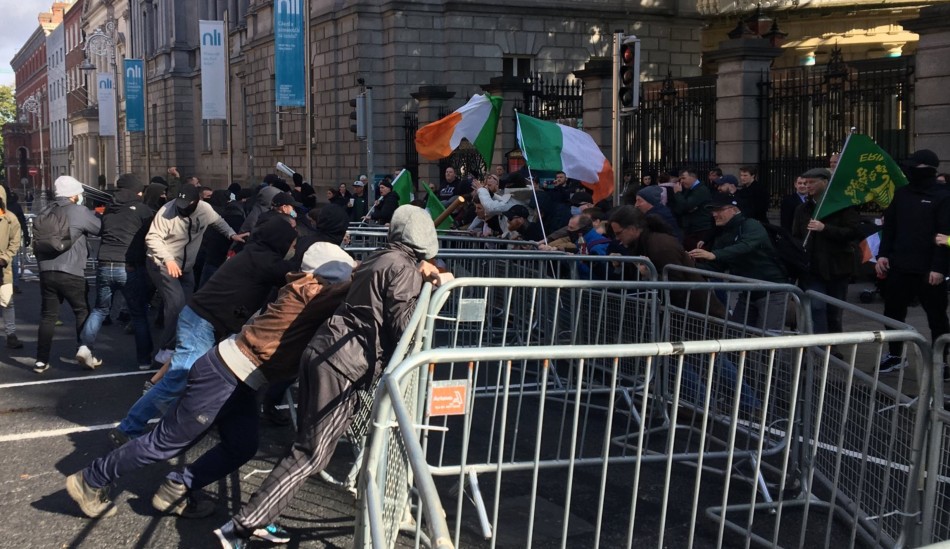 For those of us concerned about the health of our families and friends, of our neighbours and co-workers, there is something distinctly worrying about the recent confluence of lockdown-scepticism between some of the country’s conservative or neoliberal media and the internet propagandists of the wannabe Irish far-right. The conspiracy theorists and outright racists who have taken their online thuggery to the streets of Dublin and elsewhere over the last few weeks, daring the authority of the State, have done so because those with respect and standing in our society have created an environment conducive for their real-world thuggery.

Of course there has long been a number of reactionary journalists and newspaper columnists in Ireland who have played footsie with the international alt-right, finding inspiration and ideological succour in the struggles of the Anglo-American culture wars. So it is hardly surprising to find that the tiny hard-core of fascists and xenophobes at home have had their voices amplified by ideological near fellow-travellers in the press, allowing them to profit from the current crisis – or crises – facing the island. But the willingness of so many to step out from the shadows, to abandon pseudonyms and relative anonymity to bask in the adoration of their followers while pointing to the not dissimilar messages of some in the mainstream media is a new phenomenon.

I, along with others, have been warning about the baleful influence of the British and American neo-right movement on our home-grown fascists for some years now. It was only a matter of time before the crazies would start to congregate not on Twitter or Facebook but on the streets. Fortunately they are so far a minority of a minority. But they have friends and sympathisers in surprising places. And even those who would deny any connection, and perhaps be offended by such a suggestion, have taken to platforming their talking points, lending respectability to claims undeserving of anything but contempt.

Last weekend we saw the tinpot would-be dictators, the Hibernian acolytes of Trump and Farage, gathering in the capital, aping American-style rhetoric and terminology with incongruous Irish accents for a ragtag crowd of gurriers and loopers. And we witnessed some publications giving the ill-tempered assembly levels of publicity wholly undeserving of its size or status, while making false equivalency between fascist and anti-fascsist demonstrators. If the violent polemics of the neo-right takes hold in Ireland the blame will not lie with Covid-19 or Brexit or a new global recession but with the Randian instincts and the ideological loyalties of our neoliberal media.