[For an updated and much expanded overview of Gay Mitchell’s conservative Christian links click here, including his alleged association with the influential Roman Catholic political organisation known as the Dignitatis Humanae Institute]

In the interest of balance, since we have had a lot of focus on poor David Norris, lets look at his main rival, Fine Gael’s Gay Mitchell (don’t get worried, the Gay is short for Gabriel!). The Daily Mail reported a while ago on the Blueshirts’ second-place choice for the office of Uachtarán na hÉireann:

‘He was the shock choice of Fine Gael as its presidential candidate: a man who, according to many in the party, achieved the nomination because he wasn’t Pat Cox rather than because he was Gay Mitchell.

But now the MEP has achieved the huge prize of becoming the official candidate of the governing party, a nation’s voters are starting to wonder just who he really is… and they may be in for something of a shock.

For, far from being a quiet backwoodsman, Gay Mitchell is a combative – some might even say prickly – politician with some pretty eyebrow-raising views about Ireland, including his support for a radical anti-abortionist who murdered a doctor in the U.S.’

The report goes on with some more choice revelations:

‘He has been particularly outspoken in his anti-abortion views and association with Christian Democracy.

In 2003, Mr Mitchell called on then Florida governor Jeb Bush to spare the life of Paul Hill, who in 1994 murdered a doctor and his bodyguard because the medic performed abortions. But Hill was executed by lethal injection.

Last year, Mr Mitchell invited to Dublin Dr Alveda King, a radical anti-­abortion activist and a niece of Dr Martin Luther King. The American has for years been a flashpoint for controversy, making statements that include comparing abortion to racism and likening gay marriage to genocide.’

Indeed Alveda King is a militant Christian fundamentalist, a friend of the right-wing American media demagogue Glenn Beck, and someone I most certainly would not be comfortable having as a friend of any potential head of the Irish state. Whatever about Mitchell’s views on abortion, I would be very interested in hearing what his opinions are on homosexuality and whether he agree’s with King’s infamous statement that:

He regularly focuses on issues relating to the global Christian community and its alleged persecution as his website shows:

‘Gay Mitchell MEP has co-sponsored a European Parliament motion condemning attacks against Christians in the EU and beyond. “Over the past number of weeks, there has been a shocking escalation of violence against Christian people because of their faith. The European Union represents unity and diversity, we need to stand up for those values and protect religious freedom.”

On Christmas Eve, more than 80 Christians were killed by Islamic fundamentalist groups in several cities of Nigeria. During Christmas morning service at the Church of Agios Synesios, located in the northern Turkish-occupied part of Cyprus, police officers of the illegal Turkish Cypriot regime entered the church, forced the priest to stop the liturgy and forced the priest and the Christian Orthodox Cypriot worshippers out of the church. While on New Year’s Eve, a car bomb exploded in front of a Coptic church in Alexandria, Egypt, killing 21 people.’

Mitchell also appears on the website of the Iona Institute, a sort of conservative Christian think-tank and advocacy group, and is named (along with fellow Fine Gael member Lucinda Creighton) in this copy of a recent Iona Institute email:

‘Final version of EPP manifesto a big improvement on draft
Summary: A number of weeks ago we sent out an e-letter detailing how the European People’s Party’s draft election manifesto for next month’s European elections looked set to weaken the EPP’s commitment to the right to life and the family based on marriage. The good news is that the final version of the manifesto is greatly improved over the draft and basically reinstates those commitments. Please read on for more detail.

After further debate, culminating in an EPP meeting in Warsaw at the end of April, the final version of the manifesto has been agreed and it is far better than the original draft. For example, it drops the ‘family diversity’ language contained in the draft and in a nod to Judeo-Christian values says that we must be “intolerant of intolerance of our own value system and beliefs”.

The most significant addition to the final version of the manifesto is a reference to a document called ‘A Union of Values’ agreed by the EPP at a meeting in Berlin in 2001. In its opposition to abortion, destructive research on embryos and euthanasia, it is thoroughly pro life document. In addition, it contains the statement that “families where fathers and mothers take responsibility for their children are the foundation of society.”

In fact, the Berlin statement of values is more emphatically pro-life than anything produced by any of the mainstream parties in Ireland in recent year. (Note: We can email you a PDF of Berlin document upon request).

The manifesto itself is also excellent with regard to how parents reconcile family life and work. It favours empowering parents to decide whether to raise their children at home or to put them in child-care.

We understand that Gay Mitchell MEP (…) and Lucinda Creighton (…) played a significant part in getting the draft manifesto changed for the better.’

Interesting friends. And troubling too. As it is, Gay Mitchell has already suggested that the British head of state should become the head of state of any new all-Ireland nation (i.e. we should cease to be a republic – hardly making him a suitable candidate for the office of the president of that republic) and expressed opinions in the aftermath of the Lisbon Treaty referendums that Irish voters should not be given a say in these matters (i.e. we are too stupid to decide things best left to our masters –  very democratic, I’m sure). Perhaps, now that the media has sifted through every part of David Norris’ public and private affairs, it is time to focus on Gay Mitchell? Do we really want a conservative, right-wing Christian as the President of Ireland? 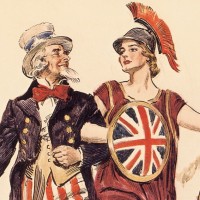