‘MODESTY AND restraint are not the virtues one associates with Irish culture in the Celtic Tiger years. But one of the finest pieces of contemporary Irish design is brilliant in part because it is contained, understated, and so supremely self-confident that it doesn’t have to shout. John Tuomey and Sheila O’Donnell’s Cultúrlann building in Derry is on the shortlist for the architectural Oscars, the Stirling Prize. I was in it for the first time last weekend and it deserves all the praise and prizes it can get. Apart from its own merits, it points towards a kind of genuine austerity aesthetic, a way for Irish art to be modest and serious without being dull and impoverished.

The Cultúrlann is the baby of the Stirling shortlist, up against far more opulent projects. Most of the other buildings cost vast amounts of money. The former British Telecoms building in London was refurbished at a cost of £72 million. The refit of the Royal Shakespeare theatre in Stratford cost £60 million. The admittedly stunning Olympic Velodrome in London, which is widely tipped to win, cost around £93 million.

The Cultúrlann cost just £4 million. But it is a wonderful contemporary validation of Mies van der Rohe’s architectural dictum that less is more.

What seems to me to give the building its power is that it emerges, not out of the sense of amplitude that characterised pre-crash Ireland, but out of scarcity – of money and space.

The Cultúrlann was an even more constrained project, built on Great James Street in the old walled city. It had to fit into the site of a burnt-out bakery, on a street of Victorian and Georgian terraced houses. To make matters worse, an electricity substation occupies a third of the site’s street frontage and had to be incorporated in the façade. And there is only one entrance to the site – there’s no view from the back of the building.

In fact, you could easily walk by the building without taking a second look. The outside is wedged between existing buildings, respects the height of the street and is conspicuously inconspicuous. If you do stop and look, you’ll notice the clever way the façade is actually arranged to look smaller than it is, folding in and out, almost like corrugated cardboard. The grey concrete exterior is broken by angular arrangements of yellow-framed windows, so that no one thing presents itself to the eye with any great force. There’s nothing imposing about the way the building sits on the street.

The genius of the design, though, is that O’Donnell and Twomey compensated for this modesty with a lovely paradox – placing the facades on the inside.

This is a great public building that is entirely without pomposity or grandiloquence. It has a genuine austerity, not just in the way it uses cheap materials like plywood and painted plaster in many of its rooms, but in the way it makes the most of every resource of space and light that’s available to it. This kind of austerity isn’t grim, slash-and-burn negativity. It’s the creativity of turning constraints into inspirations and limitations into inventions.’

Having visited the Cultúrlann several times now I think O’Toole has got it right and though my own architectural tastes are somewhat different there is no doubting the impressiveness of the building and the amazing use made of the space available. However, a bit more on what the Cultúrlann actually does, serving as a vibrant cultural centre for the region’s Irish speaking population, would have been appropriate. But then as the Ó Tuathail states:

‘The Cultúrlann is the first publically-funded Irish-language centre in the UK.’

So maybe we shouldn’t expect too much progressiveness from him (or Hiberno-English spelling either, it would seem). However he did deliver the annual lecture to this year’s Féile in the city that makes for some interesting (if familiar) reading. 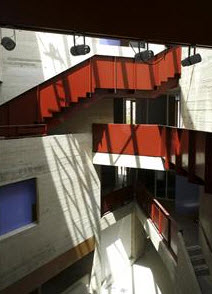