It’s been announced that Derry is to get a new Irish language community radio station, Raidió G, which will be based in Machaire Rátha. However in order to stave off protests from the more racist elements within the British Unionist minority in the north-east of the country Antrim is to get an Irish-Scots/Ulster-Scots/Ullans radio station called FuSe FM. I have made my views on the dubious provenance and purpose of the Irish-Scots dialect of English clear enough and though more open minded about the issue of late I still have my doubts. One cannot help but feel, whatever its genuine origins, that there is little more to the contemporary form of Irish-Scots beyond existing as a tactical ploy to prevent the recognition let alone provision of services in the indigenous language of the island of Ireland. The Irish-Scots tongue is in some ways simply a contrived mechanism for cancelling out any progress on equality for Irish-speaking citizens or communities in the north-east of Ireland.

Indeed the whole concept of a distinct “Scots-Irish” ethnicity (which perforce must have its own “ethnic” language, hence the quasi-artificial Irish-Scots, Ulster-Scots or Ullans dialect) is highly debatable and there are plenty of historians who would deny that any such grouping exists, at least as presented in some of the more populist tomes. Journalist Chuck Hamilton in the Chattanoogan examines the matter in a lengthy article pointing out that in America:

“Irish-Americans happily and proudly called themselves Irish within the context of being American regardless of their ethnic origin within the Irish context until the poor, despondent, starving Irish fleeing the Great Irish Potato Famine of the 1840’s began flooding into America’s northern ports-of-entry.  Seeking to distance themselves from “these” Irish, the descendants of more temporally distant arrivals began calling themselves “Scotch-Irish”.  But the term stayed in the North until early in the next century.

Meanwhile, the planter aristocracy which dominated the ante-bellum South became mired in the affectation of itself as the nobility in Walter Scott’s various historical romances.  Given this influence, the same aristocracy leaned toward the idea that they were Scottish.  That’s how the largest post-bellum paramilitary group resisting Reconstruction came to be called the Ku Klux KLAN.  Its organization and practice had more to do with secret fraternities, though, than with anything Scottish, the sole connection being the third part of the name.

Only in the early 20th century did people in the South pick up the term Scotch-Irish.  Southern Baptist minister Thomas Dixon’s highly popular Reconstruction trilogy and the plays adapted from its three novels were then sweeping the region, and the country.  To Dixon’s trilogy belong the novels The Leopard’s Spots: A Romance of the White Man’s Burden (1902), The Clansman: An Historical Romance of the Ku Klu Klan (1905), and The Traitor: A Story of the Fall of the Invisible Empire (1907).

The trilogy’s central book became a hugely popular play that pioneering film-maker D. W. Griffith turned into the 1915 ground-breaking epic “The Birth of a Nation”.  The film amplified many of the myths originating with the novel, such as cross-burning, the use of white robes, and the idea that the KKK was an altruistic group of latter day “knights” (in the actual organization ordinary members were called “ghouls”) fighting for justice against outside oppressors.  Its protagonists were the Scottish-origin Cameron family of South Carolina.

It was in this time period and with this background that the term “Scotch-Irish” came into widespread use here in the South.  The Knights of the KKK soon spread throughout the South and then the rest of the country, and even across our northern border into Canada with the organization of the Royal Riders of the Red Robe.  “Scotch-Irish” in the South meant white, Protestant, non-Catholic, non-Jewish, native-born, prohibitionist, and Christian Dominionist, the same way the term “Anglo-Saxon” was used in the North at the time.”

That supremacist edge to the “Scots-Irish” ideology remains as virulent in early 21st century northern Ireland as it did in the early 20th century southern United States. That does not take away from those aspects of the overall Scots-Irish or Ulster Protestant tradition in Ireland that are clearly legitimate and worthy of promotion and celebration (and the Irish language belongs to that tradition too). However it does raise a question mark over those values which are patently colonialist, sectarian and racist in origin and function. For how else could one describe the total and unrelenting opposition of so many in the political elites of the Unionist minority community to the Irish language and to Irish-speakers? As the Blether Region describes a related incident:

“The Orange Order has written to the University of Ulster to complain about students’ wearing of modified GAA shirts with IRA-themed images — and in the same letter about the presence of bilingual signs on campus. While the Blether Region sympathises with its arguments regarding whether the shirts are contributing towards the creation of a shared space [ASF: as a Republican even I view such clothing as inappropriate given the circumstances], it is clearly a logical fallacy to maintain that Protestants should necessarily feel alienated or afraid every time they clock a word of Irish. Quite apart from anything else, many people in Northern Ireland wallow in such deep-seated ignorance of the Gaelic that they are prone to mistake other languages for it — Ulster Scots in the case of a bilingual sign at Tullyard Way on Belfast’s Clonduff Estate, and Scottish Gaelic in the case of UK passports, to name but two cringeworthy incidents. One feels sorry for such dyed-in-the-wool non-linguists, who must pass their entire day jumping at shadows.

It is also a distasteful irony that the complaint should emanate from a pathologically sectarian organisation such as the Orange Order.

The UK is of course now a signatory to the European Charter for Regional or Minority Languages, which means that the promotion of Irish has, to some extent at least, received the official imprimatur of the state. The notion that the language should be judged on its mere presence rather than what is said in it is, frankly, bizarre. Although fluent speakers may be a small percentage of any visitors, on a practical level the presence of signs is amply justified by the maxim of “use it or lose it”. Perhaps most relevant of all, the Gaelachas of Ireland is an unalterable historical fact, so that one cannot deny the culture without denying the person.

To do so would be a wee bit racist.”

3 comments on “Fighting In Tongues” 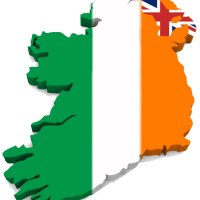 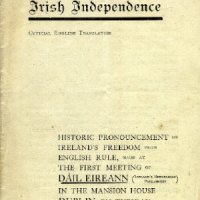 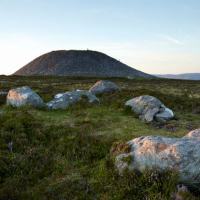