On the 21st of December 2010 the then coalition government of Fianna Fáil and the Green Party launched the “20-Year Strategy for the Irish Language 2010-2030”, a modest plan to raise the status of Ireland’s indigenous language (a policy first pledged by an all-party convention way back in 2006). Boosted by unanimous support in the Oireachtas, one of the strategy’s key goals was a projected twenty-year increase in the number of daily Irish-speakers in the country, from less than 100,000 to over 250,000. Unsurprisingly given the state’s institutional hostility to the island’s national language a much-spun review in late 2015 found that few of the core policies in the document had been implemented, and those that had been were largely tokenist or bureaucratic in nature. That remains the case today, where those who speak the language are under greater socio-economic and cultural pressure to succumb to English conformity than at any time since British colonial rule (and with no respite from the government itself, of whatever makeup).

So I read with some interest, and recognition, the news reports from Wales announcing the launch of a consultation paper by the regional government in Cardiff pledging to almost double the number of fluent Welsh speakers in the country by 2050, from 560,000 to one million people (or almost a third of the population). The Daily Post:

“Proposals for growing the number of Welsh speakers to one million by 2050 will be officially launched by the First Minister Carwyn Jones at the National Eisteddfod in Abergavenny today.

The consultation paper sets out an ambition to create a Wales which responds in a planned way to the growing demand for Welsh-medium education, and increase the number of people learning and able to use the language with their families, in their communities and in the workplace.

The proposals look to set an ambitious direction for each area that influences the language and acknowledges the need for creativity to reach the target of a million speakers.

The First Minister said they recognise the need for Government to lead the conversation but also work in partnership with many other institutions and organisations towards making the Welsh language central to public life in Wales.

Among the key areas for discussion are incorporating the Welsh language in strategic planning to make it a part of every aspect of life and making the language a normal part of everyday life.”

All of which sounds eerily familiar, drawing much the same reaction from language rights activists in Wales as the 2010-2030 strategy did in Ireland when first unveiled:

“…language campaigners criticised the First Minister for launching another consultation.

Cymdeithas yr Iaith chairman Jamie Bevan said: “Welsh as a vibrant community language is on its knees. We need the Government to act before it’s too late. After years of consultation and reports, action is needed, not more talk.””

Indeed. It is all talk but very little walk, as we have repeatedly seen in both nations. Meanwhile anglophone supremacism continues to thrive, even when those expressing it don’t recognise it as such. From Wales Online:

“The BBC has been blasted for trying to find someone who would talk about ‘why the Welsh language should die’.

A researcher for Radio 5 live tweeted the request to Oli Dugmore, the editor of university news site The Tab.

In the past he has argued that money should not be thrown into the ‘sewer’ of Welsh.

The question sparked a Twitter storm as Welsh language supporters lashed out.

The BBC has apologised for any offence caused by “an inappropriate tweet”.” 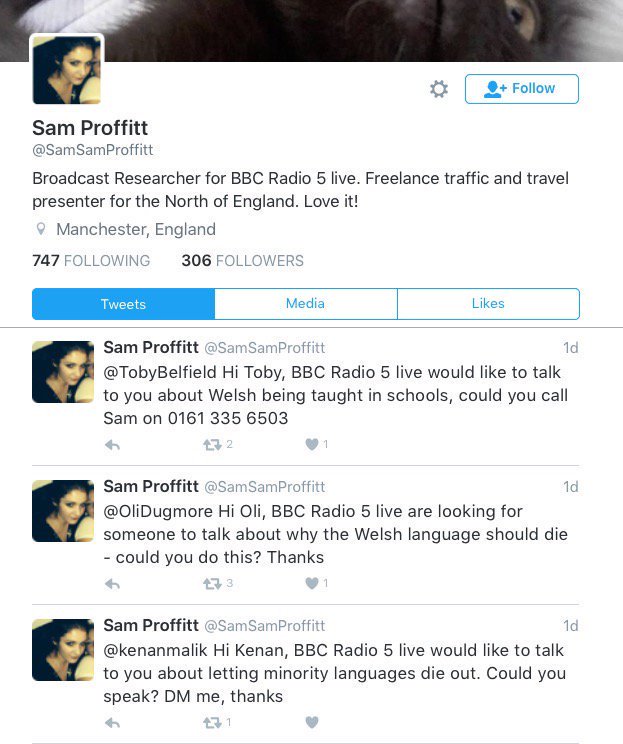 3 comments on “Language Strategies In Ireland And Wales, Tokenism For The Natives”