On Saturday afternoon up to a thousand people attended the first in a series of demonstrations in the north of Ireland to protest the possible effects of the United Kingdom’s intention to decouple itself from the European Union, a process which may lead to the imposition of a “Brexit border” between the UK-administrated Six Counties and the rest of the island. Rallies were held in Bridgend (between the counties of Donegal and Derry), Lifford Bridge (between Donegal and Tyrone), Belcoo and Aghalane (Fermangh and Cavan), Moybridge (Tyrone and Monaghan), and Carrickcarnon (Louth and Armagh). Organised by a new lobby group, Border Communities Against Brexit, local politicians and business leaders expressed profound opposition to the rolling back of the “soft reunification” witnessed in the country since the culmination of the Irish-British peace negotiations of the 1990s and early 2000s.

Activists temporarily erected a mock UK customs’ post at Carrickcarnon, reminiscent of the lightly defended installations sited along the “border” from the 1920s to 1960s. These were replaced in the early years of the 1966-2005 Long War with a chain of heavily fortified checkpoints and bases manned by British troops and counter-insurgency police enforcing Britain’s continued occupation of the north-east. Their eventual removal between 1994 and 2007 was one of the key criteria for the process of demilitarisation agreed between the representatives of the UK and the Irish republican movement. By 1997 over one hundred “unapproved” cross-border routes had been reopened by local communities with no interference from the British authorities. In previous years such actions would have led to large-scale military operations and sustained clashes between residents and the UK Forces. 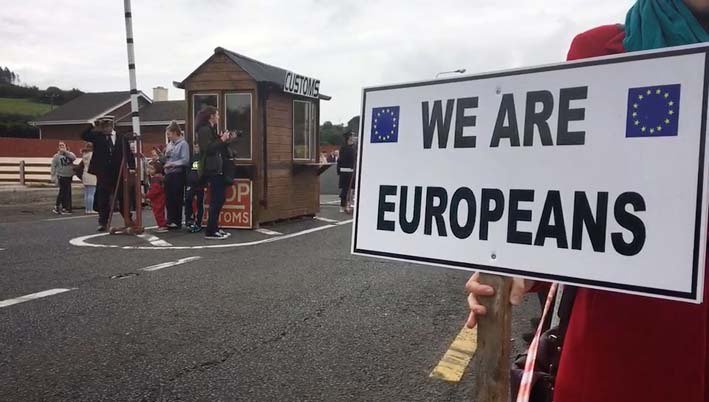 In a desperate attempt to stave off the potential for renewed conflict in the Six Counties the British government seems to be floating the suggestion that Ireland’s international borders could become a de facto boundary of the United Kingdom, at least as far as immigration control is concerned. The Guardian has more:

“Britain is seeking to shift the frontline of immigration controls to Ireland’s ports and airports to avoid having to introduce a “hard border” between north and south after the UK leaves the European Union, the Guardian has learned.

The Northern Ireland secretary, James Brokenshire, has told the Guardian that London and Dublin will work to strengthen Ireland’s external borders in order to combat illegal migration into the UK once it leaves the European Union.

After Britain’s vote to leave the EU in June, concern mounted that to control immigration, measures would have to be imposed on the 300-mile border between the Irish Republic and Northern Ireland. Any such border controls would probably be seen as a violation of the Good Friday agreement and a provocation in a region that has only relatively recently put violence behind it.

The Fine Gael-led coalition government in Dublin has confirmed it is in negotiations with London to better share intelligence to tighten immigration controls for people from outside Britain and Ireland.

Ireland’s foreign minister, Charles Flanagan, said he welcomed Brokenshire’s commitment to an invisible north-south border and agreed on the importance of an intelligence-led approach to curbing illegal immigration across the Irish border.

Brokenshire said that Brexit would neither destabilise the power-sharing institutions set up under the Good Friday agreement nor provide any propaganda boost for hardline dissident republicans opposed to devolution in Belfast.”

If the chauvinistic Tory government in London believes that a soft annexation of Ireland’s border controls will be met with equanimity or acceptance by the Irish people as whole, let alone the so-called “Dissidents“, then they are operating on a Trumpian level of self-delusion. Why on earth would this island nation dilute its sovereignty and standing in the world by associating itself with the United Kingdom’s xenophobic immigration policies? And what is the alternative if we do not agree to this fanciful imposition? A mild and implied version of the “…terrible and immediate war“, as expressed to the Irish treaty negotiators in December of 1921?

As other observers have pointed out, the logical border between the island nations of Ireland and Britain, between a member state of the EU and a non-member state, lies in the latter’s sea and airports. The Irish Sea is the boundary between both countries, not an imaginary line drawn around the anachronistic remainder of Greater England’s colonial misadventures in this country. If Britain truly wishes to abandon the European Union, then by all means go ahead. But it will not be taking Ireland or any part of Ireland with it.