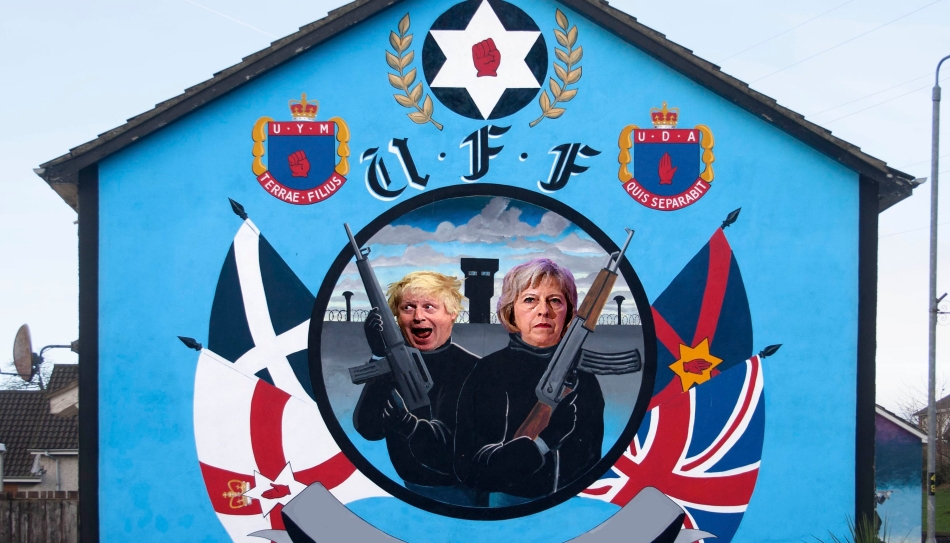 On the 5th of June 2017, just four days before the general election in the United Kingdom, a group known as the Loyalist Communities Council issued a statement urging pro-union voters in the UK-administered north-east of Ireland to support a list of candidates from the Democratic Unionist and Ulster Unionist parties. The LCC, a front organisation for three British terrorist factions, devoted particular attention to the candidacy of Emma Little-Pengelly of the Democratic Unionist Party. The daughter of a notorious gunrunner, Noel Little, the former lecturer was something of a cause célèbre for militant loyalists who devoted considerable energy to drumming up support for her in South Belfast, contributing to her successful election on the 8th of June to the House of Commons in London.

A week later, the Ulster Volunteer Force, one of the armed gangs behind the LCC, began to erect flags emblazoned with its logo and lettering in the Global Crescent and Cantrell Close districts of south-east Belfast. Regarded as a “mixed” area, the neighbourhood was home to several dozen families from the Irish nationalist and British unionist communities living in relative harmony. Local politicians and peace activists condemned the effort by the UVF to stake out new “territory” in the city, a move clearly designed to intimidate its non-loyalist residents. The notable exception was the DUP’s Emma Little-Pengelly, who responded to the controversy by underplaying its importance, as reported by the Belfast Telegraph:

Ms Little Pengelly said she spent several hours calling to around 100 homes in the area and was satisfied that the majority “didn’t want a public fuss around this matter”.

She stated: “There were some people who were very supportive of the flags, people who felt very much it was part of the tradition of the local area and the wider area.”

The disingenuous words of the hard-right MP were seen by many as a tacit defence of the extremist groups in Belfast who had encouraged voters to turn out for her earlier in the month. That same turn out which boosted the electoral standing of the Democratic Unionists Party across the disputed region, giving it the opportunity to negotiate a parliamentary coalition with the minority Conservative Party government in Britain. This came with an unprecedented financial bribe for the DUP’s favoured causes, worth over 1 billion pounds, and insider access to the levers of power in London.

Given the nexus of relationships between pro-union political parties and militant groups in the UK’s legacy colony on the island of Ireland, it is not unreasonable to claim that the British government under Theresa May now bears some culpability for the actions of those who directly and indirectly keep it in office. From a report by the news and current affairs website Belfast Live:

Catholic families living in a newly developed shared neighbourhood have been ordered to get out of their homes under sectarian threat.

They have presented themselves to the Housing Executive as homeless.

The residents who live in Cantrell Close off Ravenhill Rd, were visited by police on Tuesday around midnight and issued with advice about the threat, believed to be from loyalist paramilitaries.

The close, with Global Cresent, has been part of the government strategy aimed at unifying communities in mixed housing areas.

Though the Tory administration in Britain would reject the charge, arguably it is now guilty by association with the British terrorists who have forced the removal of Irish families from their homes in parts of Belfast. By empowering the fundamentalist Democratic Unionist Party, the Conservatives have also empowered – and emboldened – those violent extremists who hide in its shadow.