One of the more noxious effects associated with the rise of Brexitism in the United Kingdom has been the return of hard right beliefs and ideas to the mainstream of British politics. While such attitudes have always had their place in the political life of the country, the success of the Leave campaign in the 2016 referendum has led to a renewed elevation of xenophobic and racist sentiment among conservative politicians and journalists, either explicitly or implicitly so.

Into the latter category falls this Times of London opinion piece by the former newspaper editor Dominic Lawson, the son of Nigel Lawson, the ex-Chancellor of the Exchequer or finance minister under Margaret Thatcher, who was outed as a mouthpiece for the British Secret Intelligence Service or MI6 in 2001, partly though his own hubristic boasting three years earlier.

According to the aristocratic columnist, the motivations for Ireland’s criticisms of the United Kingdom’s confused handling of its chaotic withdrawal from the European Union can be attributed to the personal failings of Leo Vardakar, Taoiseach na hÉireann.

Varadkar’s motives are not trade related but political and personal. He is widely seen as less Green (in the Irish republican sense) than his predecessors and must work harder with his domestic electorate to prove himself ready to stick it to the Brits.

Given that the Dublin West TD is the leader of Fine Gael, a conservative grouping which split from Irish republicanism in the 1920s, the claim that he is less “republican” than his predecessors is a nonsense. Even more so when one realises that Varadkar succeeded Enda Kenny as the head of government in Dublin, the previous leader of his own party.

One suspects that what Lawson is actually referring to by Leo Varadkar being less “green” than those taoisigh who came before him, is a sly dig at his mixed parentage. It seems that in the eyes of some UK politicians and journalists, the colour of one’s skin calls into question one’s nationality or ethnicity. Therefore Lawson assumes that the Irish must embrace the same prejudices as their British neighbours.

And what of this?

…Varadkar sees his own future in terms of the EU’S political prize: he aspires to become Ireland’s first president of the European Council In Brussels. Playing the hitman for Michel Barnier, the EU’S chief Brexit negotiator fits perfectly with that ambition. So he endorses the EU’s insistence that there is no “technological solution” to the Irish border issue – and so the UK must accept the “backstop” of remaining in the customs union and, in effect, the single market.

Ah yes, because foreigners are always motivated by greed and avarice – especially the ones with tanned skin – lacking the common notions of decency and fair play which has characterised British history and actions for centuries. And all in the envious service of keeping mighty Britain down. The dog-whistle politics of Brexitism in one handy article! 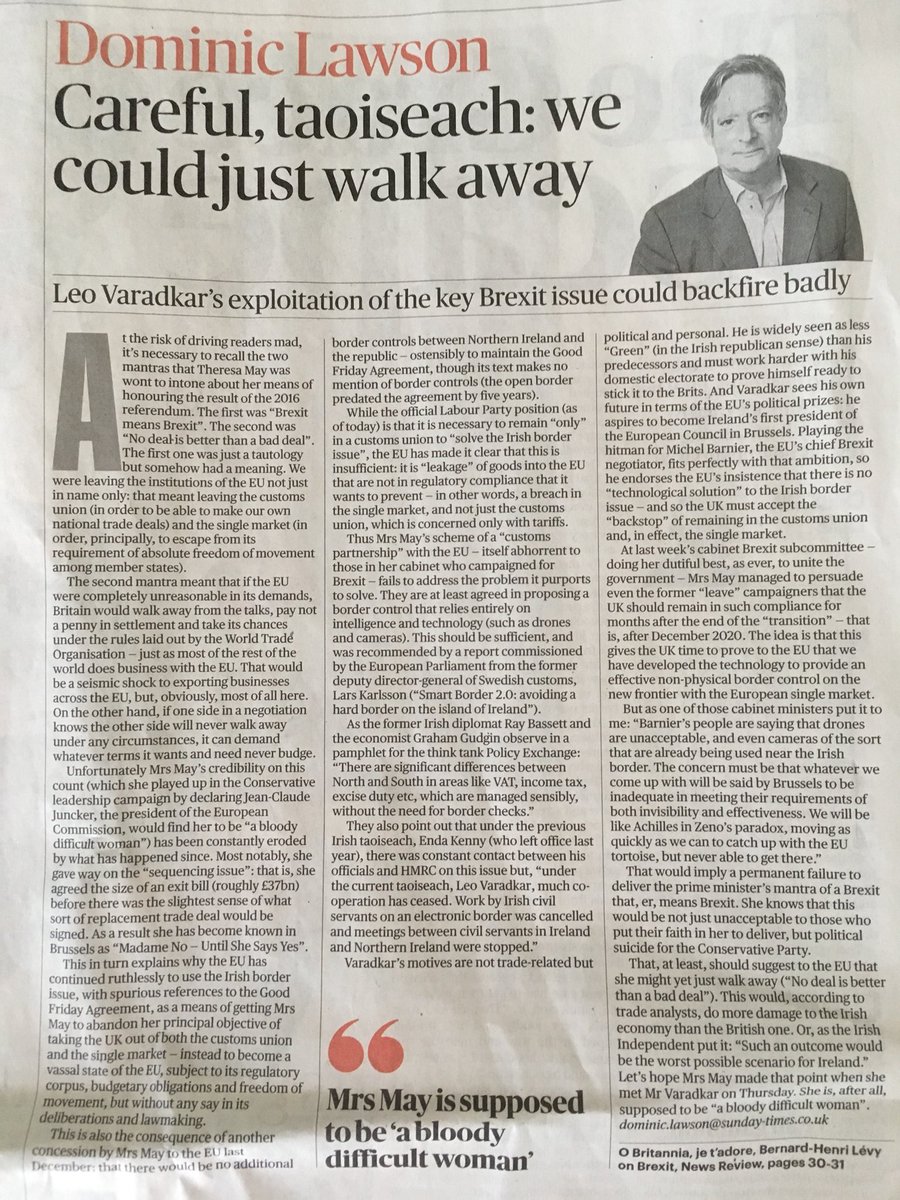