The fatal wounding of the Irish journalist Lyra McKee during an indiscriminate New IRA gun-attack on PSNI officers and armoured vehicles in the city of Derry, where she was observing violent protests following police raids earlier in the day, rightly shocked and dismayed the country, bringing back memories of the worse years of the northern conflict. The twenty-nine year old writer had earned a modest reputation for herself both domestically and internationally as a literary poster-child of the post-Troubles generation; although unlike many others of that age group, the Belfast-born woman had maintained an activist’s interest in the causes, the course and the outcome of the thirty years of war and strife in the north-east of the island.

Her tragic death led to weeks of eulogising and hand wringing in the Irish and British press with a gaggle of government leaders, politicians, diplomats and journalists attending her funeral at St Anne’s Cathedral, Belfast, expressing solidarity with her loved ones and a very public, if rather select, rejection of politically-motivated or -directed violence. Reports that a new book by McKee on the Troubles was to be published posthumously received almost equal publicity, fitting in with the narrative of a talented up-and-coming young author cut down in the prime of her life by the “[Irish] men of violence”.

It is somewhat strange then that Lyra McKee’s posthumous work, Angels With Blue Faces, launched at the start of August has been all but ignored by the media in Ireland and Britain, with a notable if isolated exception, receiving a handful of lacklustre reviews. This is even stranger when one considers the sensationalist subject matter of the book, the assassination of the Reverend Robert Bradford, a Methodist minister and elected member of the House of Commons for the Ulster Unionist Party, in November 1981. The (Provisional) Irish Republican Army claimed responsibility for the gun attack in a local community centre that resulted in his death, accusing the high-profile Belfast South MP, a former representative of the far-right Vanguard Unionist Progressive Party, of stirring up sectarian violence in the city and giving succour to militant loyalism.

However rumour and speculation about the exact circumstances of Bradford’s death has circulated ever since, with even the normally staid Jim Molyneaux, the head of the UUP and Bradford’s former leadership rival, insinuating that agents of the British state were behind the slaying. And this forms the crux of Lyra McKee’s partly crowdfunded book. In it she alleges that Robert Bradford was about to make public one of the best kept secrets of the Troubles. That the United Kingdom’s intelligence services, specifically the Security Service or MI5, had been monitoring at best, facilitating at worse, the activities of a latterly proven paedophile ring based at Kincora Boys’ Home, East Belfast, in order to blackmail a number of prominent terrorists, politicians and businessmen from the ostensibly pro-UK or pro-union community as part of its strategic campaign against the IRA and its supporters. And that fears of Bradford revealing its operations had led the clandestine organisation to set up the well-protected UUP MP for assassination, supplying targeting information to the IRA through double-agents in its ranks.

It’s strange then that a sensational investigation into Britain’s dirty war in Ireland, featuring a litany of well-known characters and events from recent British and Irish history by a journalist who died in headline-making circumstances has been largely disregarded by the press in both countries. Especially as she herself allegedly confided to friends that she was “getting paranoid” due to the dangers around her research. Conspiracies, spies, terrorism, the abuse of children, the corruption of politicians and governments, all this should be grist for the media mill. But instead the number of reviews in print or online for McKee’s publication has been paltry and those that have been printed have been dismissive.

So what’s going on here? Despite claims to the contrary there is no evidence that there is any overarching attempt by the authorities in the UK or their sympathisers in Ireland to “deplatform” Lyra McKee’s book or the controversial suggestions within it. Rather, it seems that many journalists and editors, especially the British ones, simply aren’t interested in that aspect of the Belfast woman’s life and career. Instead they only see value in the circumstances of her death, as a political cudgel against Irish Republicanism in general, or as a convenient metaphor for the “tribalism” and “atavistic nature” of the Troubles in the north of Ireland, hiding its colonial causes behind Britain’s age-old canard that, “That’s just what the Irish do. They kill each other”.

Which means that the general public in the UK will continue to live in self-satisfied ignorance of their nation’s activities on this side of the Irish Sea, denying their responsibility and role in the Troubles. Past or future. 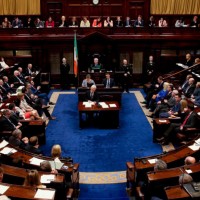