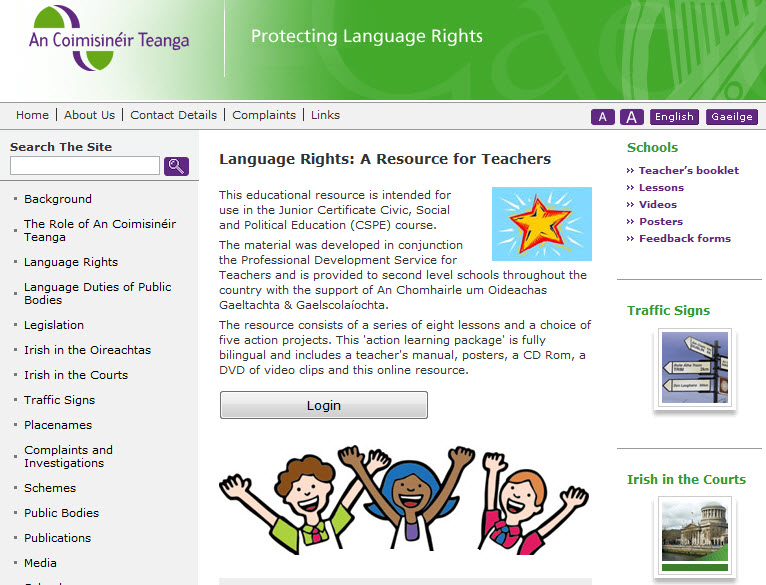 Seán Ó Cuirreáin, An Coimisinéir Teanga or the Irish Language Commissioner, is the person tasked with ensuring that our public services are available to the Irish speaking population in their own language (and given the hostility of some English speakers to their Irish speaking peers a monumental task it is). On Tuesday he announced the launch of a new civil rights information pack for all second-level schoolchildren in Ireland, outlining their constitutional and legal rights to converse in their native tongue. Despite this important new development the Irish Times was the only English language news outlet in the country to report the story:

“STUDENTS FROM Coláiste na Coiribe in Galway were told yesterday by the official Irish Language Commissioner that they were “guardians of an important and endangered aspect of world heritage”.

The students were present at the launch of a new information pack which is to be presented to every second-level school in the country by An Coimisinéir Teanga Seán Ó Cuirreáin.

The multimedia educational initiative developed by his office in An Spidéal, Co Galway, aims to give students an insight into language rights in the overall context of universal civil and human rights.

Bilingual lessons and projects on the theme will be taught as part of the Junior Certificate course in civil, social and political education, Mr Ó Cuirreáin said yesterday.

The initiative was also endorsed by Minister of State for the Gaeltacht Dinny McGinley.

The Junior Cert module will address the advantages and challenges of multilingualism, and explore the United Nations Universal Declaration of Human Rights.

[Mr Ó Cuirreáin] …explained that the module can be taught through Irish, through English or bilingually.

“More than anything else, this project should ensure that students are given a context for their learning of Irish in schools and that they understand and respect the concept of language rights,” he said.

Mr Ó Cuirreáin forecast that it could be “potentially the most important initiative undertaken by this office since its establishment, if it sees significant numbers of students each year being taught the importance of language rights”.”

Hopefully this initiative will do much to erode the discriminatory attitudes found amongst a minority of monolingual English speakers, attitudes that are usually inculcated at childhood from parents or the Anglophone media. Indeed it has been argued that the anachronism of anti-Irish racism in modern Ireland is in part down to  an influential core of English language newspaper journalists, editors and proprietors (leading to the biting characterization of this group as the “Angliban”). Given the casual racism one reads almost every week towards Irish speakers in Ireland’s English language newspapers it is an argument that it is hard to find fault with.

Casual or institutional bigotry towards Irish speaking citizens is one unwelcome colonial legacy most people in Ireland want to see the back of – along with its perpetrators. Let us hope that learning about respect and tolerance, as well as legal rights and freedoms, will raise a generation of Irish people whose minds are finally free of the poison of colonialism.