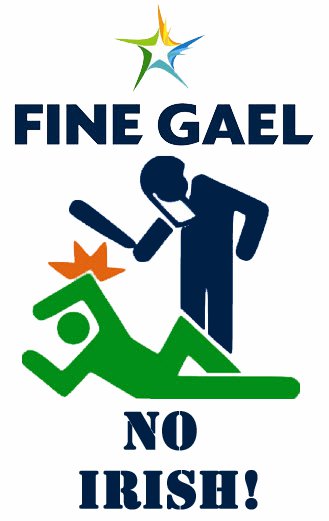 Over the last year I have catalogued on An Sionnach Fionn the inherent hostility of the right-wing Fine Gael party to the Irish language and Ireland’s Irish speaking communities, a situation that has only worsened since it entered into government with its junior coalition partners in the supposedly centre-left Labour Party.

In power both parties have displayed various levels of antipathy or indifference to any notion of equality between the nations’s Irish and English speaking citizens. Driven by Anglophone contempt they have taken measure after measure to undermine the status of our national tongue while slowly dismantling a decade of civil rights legislation for Irish speakers (legislation that took a shameful eighty years to be put in place and which has met consistent opposition from within the civil service and other public bodies).

Now these crude anti-Irish impulses have reached their absolute nadir with the conservative “youth wing” of Fine Gael, Young Fine Gael (YFG), passing a resolution at its recent conference (attended by FG leader Enda Kenny) calling upon the party to effectively degrade the Irish language and the standing of Irish speakers in the education system by removing its obligatory teaching in the last few years of schooling. From the Irish Times:

“A resolution passed at last weekend’s Young Fine Gael national conference in Tullamore calling for the removal of Irish as a compulsory subject in the Leaving Certificate has been criticised by Fianna Fáil.

The motion, proposed by Young Fine Gael’s Wexford branch, called on Fine Gael “to live up to its election promise and remove Irish as a compulsory subject in the Leaving Certificate.”

Fianna Fáil spokesman on Justice, Equality and Defence Dara Calleary said…“The continuation of this policy by Fine Gael to downgrade Irish within the education system has no merit and threatens to undo the significant work that has been carried out, particularly through the Gaelscoil movement, to increase Irish usage in our communities.”

The proposal was criticised by language and Gaeltacht community groups last year prompting a number of Fine Gael election candidates to express their disquiet at the plan.

In February students marched on Fine Gael headquarters and handed in a petition signed by more than 15,000 students opposed to the measure.”

Young Fine Gael, which has moved increasingly to the right in recent years, has regularly embroiled itself in questionable activities and policies (not to mention quiet bizarre attempts to recruit new members). At the start of this year YFG activists publicly supported a proposal to make the controversial former British Prime Minister Margaret Thatcher an “honorary member” of their organisation despite her disastrous role in Irish affairs in the 1980s, a role which arguably prolonged the conflict in the North of Ireland by over a decade. FYG members have been involved in invitations to various right-wing figures from around Europe to make speeches or give lectures in Ireland, notably the infamous Holocaust-denier and Nazi-apologist David Irving, and Nick Griffin the leader of the British National Party, an extreme right-wing British nationalist organisation with Neo-Nazi and fascist roots (the “Irish” commentator and arch British-apologist Kevin Myers seemed to make an extraordinary defence of both in his regular column for the anti-liberal Irish Independent newspaper in January).

Now, true to Fine Gael’s corrupt Neo-Unionist and anti-democratic roots, elements of the party are once again targeting those in Ireland who identify with our indigenous language and culture in an attempt to roll back the slow progress of growth and development made by the Irish-speaking communities of Ireland since the 1990s. A veritable vipers’ nest of Anglophone intolerance and bigotry, Young Fine Gael – like much of its parent party – represents all that is wrong and self-destructive in modern Irish society. A society where all too many are still bound by the mental shackles of eight centuries of colonial occupation.