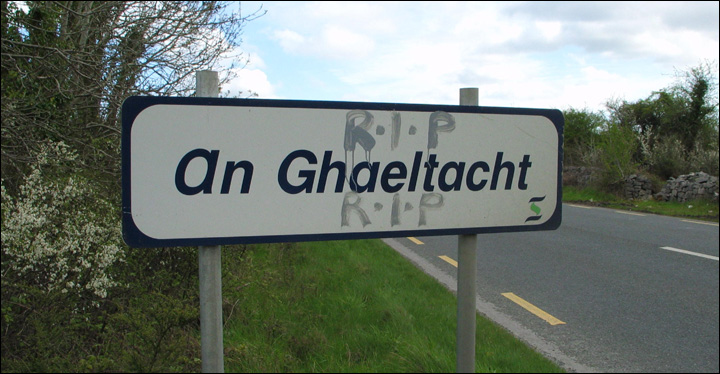 A few weeks ago the appointment of two ministers by the government of Ireland with responsibilities directly effecting the interests of Irish-speaking communities and citizens was mired in controversy when it became clear that neither appointee could actually speak the Irish language (despite the presence of several other fluent candidates in the government parties). Both ministers pledged to ameliorate the situation by learning (or relearning) Ireland’s national and first official language and so far one, Joe McHugh, seems to be making some progress in the matter. However the response from the senior government minister Heather Humphreys has been rather more dismissive of people’s concerns. From the Journal:

“Humphreys and her junior minister Joe McHugh, who has specific responsibility for Gaeltacht Affairs, have been criticised in recent weeks after it emerged that neither of them were fluent in the language.

But while McHugh has made much of his efforts to re-learn the language in recent weeks, Humphreys, a Fine Gael TD for Cavan-Monaghan, admitted today she has been too busy to begin lessons.

She said in July that she was prepared to “brush up” on her Irish.

But speaking at the launch of Culture Night 2014 in Dublin today… Humphreys said: “No I haven’t started Irish lessons yet, but I do hope to get some squeezed in at some stage shortly. I can’t give you a timescale because the schedule is very busy.””

Which pretty much sums up the attitude of the Fine Gael-Labour Party coalition towards the civil rights of its Irish-speaking citizens in the first place.

Meanwhile across the Irish Sea our Celtic cousins actually respect their own language and identity, as reported by WalesOnline:

“All four political parties across Wales have pledged to adopt Welsh internet domain brands when they become available later in the year, it can be revealed.

Senior figures and leaders of all four parties signed up to be founders of the .wales .cymru domains, which will see Welsh Labour, the Conservatives, Plaid Cymru and the Liberal Democrats transfer their web domains.

The move, which got the go ahead earlier this year, is designed to help market Wales to the world.

The parties’ pledges also come in the wake of the National Assembly formally pledging to become an early adopter in the process – being steered by Nominet Wales – meaning its domain will formally change in the autumn.

Jo Golley, commercial manager for .cymru .wales, said: “The decision of the four parties to come together and support the new domains is fantastic news. Over the coming days and weeks, we will be welcoming others from the public, private and voluntary sectors, who all want to embrace .cymru .wales.””

5 comments on “No Time For Irish – Government Policy In Ireland”