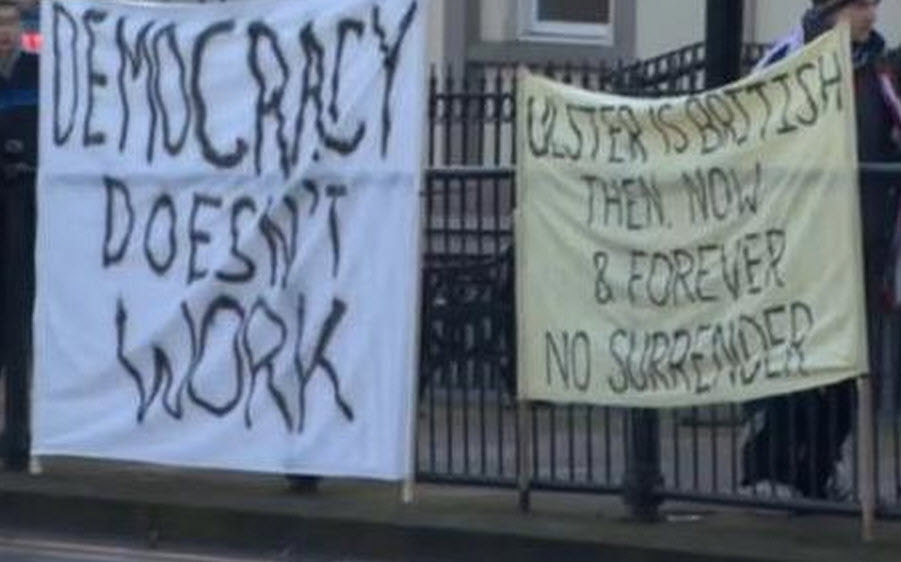 Dara Kelly over on the Irish Central examining the continuing controversy stemming from the recent examples of British legacy racism in Ireland as displayed by politicians from the DUP grouping, the majority Unionist party in the north-east of the country and part of the regional power-sharing administration in Belfast:

“The world had a sobering look at the unvarnished bigotry of the Democratic Unionist Party in Northern Ireland this week, after one prominent member expressed his contempt for the Irish language whilst another sought to exempt party supporters from following from Northern Ireland’s equality laws.

In language calculated to offend, DUP member Gregory Campbell told a party conference that he would treat a proposed Irish Language Act “as no more than toilet paper,” garnering hearty applause from the attendees.

Meanwhile fellow DUP member Paul Givan pledged to introduce a new private member’s bill to allow the public to legally discriminate against gay people in Northern Ireland based on their “conscience.”

It remains to be seen why people of good conscience would want to discriminate against the Irish language or gays, of course.

But in explaining their positions Campbell and Givan made free with the kind of hostile rhetoric that would result in their immediate firing in other states, but in Northern Ireland has actually elevated the DUP to its current status as the voice of unionism.”

Meanwhile Gerry Adams, the Sinn Féin president, has attacked the key ideological aspects of political Unionism in Ireland while answering questions at a meeting in Fermanagh, using uncharacteristically direct language that has drawn the ire of Unionist leaders and their apologists in the Irish media. Below is a section of the transcript of his recorded Q&A as published by the Impartial Reporter newspaper:

“I didn’t think it was possible but the DUP seem to be going backways and more bigotry, you know. Is there a line in the sand that we say, look it, there’s no point even trying with these ones because they are dragging the whole thing down.

…it is a matter of being patient but not being too patient, you know, trying to push, push ahead.

And you can rest assured that somewhere in that notion of why increasingly Unionists aren’t voting is that they are scundered by the likes of Gregory Campbell, they are scundered by the things that are going on. They are not going vote for us and so on at this stage, in our development or their development but, I mean, yous all live here – how many Unionists do you talk to? We’re trying to convert people and in there somewhere the sort of fundamentalist bigotry, because that’s what it is – it’s nothing got to do with politics. It’s got to do with blind bigoted hatred of people and not just Catholics, of Presbyterians, of Church of Ireland, of Meth- …of everybody, bar the people who share their own very narrow vision of the world.

But what’s the point? The point is to actually break these bastards – that’s the point. And what’s going to break them is equality. That’s what’s going to break them – equality. Who could be afraid of equality? Who could be afraid of treating somebody the way you want to be treated. That’s what we need to keep the focus on – that’s the Trojan Horse of the entire Republican strategy – is to reach out to people on the basis of equality.

The question about where is the tipping point… You see, the interesting thing about Gorbachev… Gorbachev didn’t set out to get rid of the USSR – that wasn’t his intention. He wanted to modernise it. It needed to be reformed but once he started to pull the thread it wasn’t possible. The Afrikaners didn’t want to bring about an ANC government in South Africa. They wanted to get rid of the international campaign that was hurting them in terms of their different money making ventures.”

Clearly the intent of Adams’ words was to focus on the need to overcome the “bastards” who pursue unapologetically racist, sectarian and homophobic policies as part of their political agenda. Blunt it may have been but it was also honest. Naturally some Unionists have taken it as a more general criticism of their community which leads to the bizarre sight of senior DUP and UUP politicians tacitly defending such bigotry as an important ideological aspect of British Unionism. Journalist and commentator Kevin Meagher tries to make sense of all this for a largely ignorant British audience in the London-based New Statesman magazine:

“…Northern Ireland’s culture wars are now in full flight. These are proving even harder to resolve.

Step forward the DUP’s veteran republican-baiter, Gregory Campbell. In a cringeworthy performance at their annual conference over the weekend, he returned to a favourite theme, poking fun at the Irish language, historically suppressed under British rule and therefore spoken by many nationalists, not just the Sinn Fein activists he was taking aim at.

He said the nationalist movement’s “wish list” of an Irish Language Act and a Bill of Rights, enshrining equality, should be treated like “toilet paper”. Creditably, Campbell was upbraided yesterday by none other than Kyle Paisley (son of Ian) and a Free Presbyterian minister, who said his provocative remarks were “shameful”.

Nevertheless, the Sinn Fein President, Gerry Adams, rose to the bait, describing unionist recalcitrants like Campbell as “bastards” and promised to “break them” with equality. It may be that Adams, the acme of the disciplined, message-conscious politician, was throwing red meat to the republican movement’s soft flank, which sees these sorts of attacks from unionists, and the lack of movement over equality issues more generally, as weakness on his part.

Sinn Fein does, however, make a reasonable point when it accuses unionists of not embracing the equality agenda. Northern Ireland was, after all, designed to be a hegemonic, sectarian state with in-built privileges for loyal Protestants. For them, equality is a zero-sum equation: when nationalists gain, they lose. This explains the soft-pedalling on a bill of rights and the Irish language.

However it would be a mistake not to recognise that the current power-sharing arrangements are under severe stress.

Northern Ireland’s very existence remains the ultimate point of dispute and is not readily reconcilable. The genius of the Good Friday Agreement – its creative ambiguity – was in providing either side with enough of a story to tell their respective communities about how their aspirations – and their competing cultures – will be maintained.

Yet 16 years on from its signing, is it still enough?”

With growing evidence of increased tolerance – if not active support – for Republican insurgent groups, the frustrations of a stalled Peace Process that was supposed to herald real political change is leading to increasing unrest or apathy in both communities in the north-east of Ireland. For Unionists events are moving too far, too quick and in too much the wrong direction. For Nationalists they are not moving half-quick enough. The next “UK” general election of 2015 will undoubtedly be important. However of greater significance will be the northern assembly elections in 2016, with Sinn Féin about to score or having already scored significant gains in the Irish general election of the same year. A strong SF influence in Dublin and perhaps the party taking the office of First Minister in Belfast is for many Unionist leaders and activists the nightmare scenario. The perfect storm of northern politics that will collapse the inherently unstable edifice at Stormont.

7 comments on “The Perfect Storm Of Irish Politics”